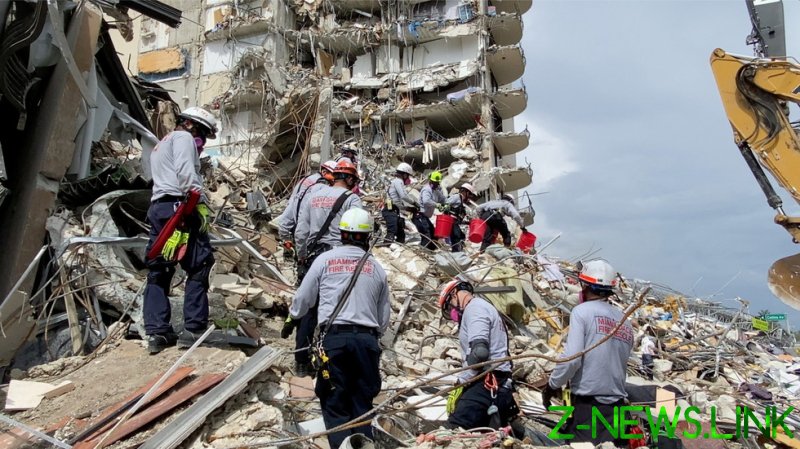 A consultant hired in 2018 to inspect the Champlain Towers South condominium complex found evidence of “major structural damage” to the concrete slab below the pool deck and “abundant” cracking and crumbling of columns and other structural support in the parking garage, the Times reported.

In his report, the engineer, Frank Morabito, said that while some of the damage was minor, most of the deteriorating concrete “needs to be repaired in a timely fashion.” Morabito did not suggest that the building was at risk of collapse, although he did say that recommended repairs would help preserve the “structural integrity” of the condo complex.

He was particularly concerned about waterproofing below the pool deck, cautioning that if it wasn’t repaired in a timely fashion, the “extent of the concrete deterioration” would begin to “expand exponentially.”

According to Morabito, the waterproofing was laid flat – a serious design flaw that prevented the water from running off. He noted that the problem would be “extremely expensive” to fix and that the necessary repairs would be a major inconvenience for residents.

The engineer’s report also included photographs showing damage to columns of the parking garage, as well as exposed steel reinforcements on the garage deck. He noted that efforts to patch up the crumbling concrete were not sufficient, as “new cracks were radiating from the originally repaired cracks.”

Morabito declined to comment on the report when contacted by the Times.

His findings helped guide a multimillion-dollar refurbishment project that was set to begin soon. A lawyer who represents the resident-led association that operates the building told the Times that the repair process would have been handled much differently if there had been any indication that the corrosion — not uncommon in coastal buildings — posed a serious threat.

However, Eliana Salzhauer, a local commissioner, told the Times that the 2018 report was still “upsetting” because it shows that the condo board was aware that there were issues with the building.

According to the paper, residents had repeatedly reported issues that may have contributed to the structure’s failure. One tenant filed a lawsuit in 2015 alleging that poor maintenance had allowed water to enter her unit through cracks in an outside wall.

Authorities are still trying to determine what caused Thursday’s catastrophic failure, which led to an entire section of the building crumbling into a pile of debris.

So far, at least four people have been confirmed dead. 159 people remain missing. Emergency crews have been working around the clock in hopes of finding survivors buried under the rubble.

The tragedy was declared a national emergency by President Joe Biden, who mobilized federal agencies, including the Federal Emergency Management Agency (FEMA), to help with search and relief efforts.

Miami-Dade County Mayor Daniella Levine Cava said on Friday that the search would continue and there was still hope that more people would be found alive. Workers are using “everything possible” – including sonar technology, cameras, and specially trained dogs – to assist with the search, the mayor said.

The American Red Cross has been providing emergency hotel lodging for residents who have been displaced by the partial collapse.