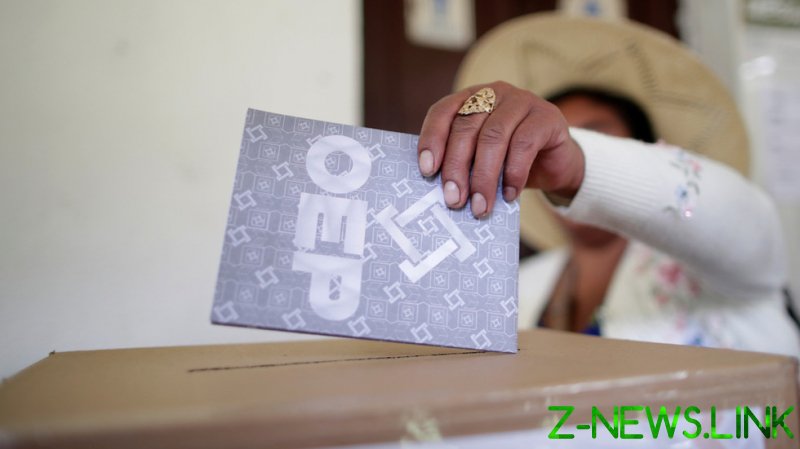 Between October 2020 and January 2021, Angela George – a trial attorney at the DOJ’s Office of International Affairs – repeatedly mailed a group of analysts at Massachusetts Institute of Technology (MIT) to obtain their research – eventually threatening to compel them to do so, according to an email chain released by The Intercept news outlet.

In their study for the Center for Economic and Policy Research (CEPR), MIT analysts Jack Williams and John Curiel refuted allegations of election-rigging by incumbent Bolivian President Evo Morales and his Movement Toward Socialism (MAS) party.

After Morales was voted back into power for a fourth term in the October 2019 election, opposition parties immediately leveled charges of voter fraud – which were amplified by an election audit conducted by the influential Washington-based regional cooperation body Organization of American States (OAS).

The Trump administration’s top diplomat for Latin America, Michael Kozak, weighed in and promised to “hold accountable anyone who undermines Bolivia’s democratic institutions.” After three weeks of unrest, the opposition installed Jeanine Áñez as president, in a coup.

The CEPR study, whose findings were published in February 2020, conducted a statistical analysis of the data and did not find “quantitative evidence” of irregularities as “claimed by the OAS” – and as had been reported by several major US publications, including the New York Times.

Following more protests and unrest, the Áñez government was forced to hold a new election, held on October 18, 2020. The first mail from Angela George came on October 15, just three days before the polls. In the initial email, the DOJ lawyer said the study data had been “formally requested” by the Bolivian government for a “criminal investigation” it had opened.

When in subsequent emails, Williams responded that the research had drawn on public information, George wrote, “I am simply trying to find out if the report… includes your research and is an authentic copy of the report that was produced” before raising the prospect of “a subpoena being served on you and the [MIT Election] lab” should it be required.

Speaking to The Intercept on condition of anonymity, a source familiar with the investigation said the “Justice Department inquiry frightened election researchers in the academic community and may have had a chilling effect on subsequent research.”

According to a former DOJ trial attorney who has also worked at the Department’s Office of International Affairs (OIA), the email exchange was “unusual.” That person, who also requested anonymity, noted that it signaled this was not a regular criminal investigation.

“This particular request is not your run-of-the-mill criminal investigation, so you can be fairly sure that it received very high-level exposure,” they said.

“Generally, OIA would enlist the FBI or other investigative agency to execute an incoming MLA (Mutual Legal Assistance) request such as a voluntary witness interview or inquiry like this one. It’s unusual for an OIA attorney to handle it,” the former trial attorney told the outlet.

A DOJ spokesperson declined to comment about the email exchanges, according to The Intercept.

Although Morales was in exile during the 2020 election, MAS won in a landslide. He has since returned. Áñez, who had dropped out of contention a month before the new election, is facing terrorism, sedition, and conspiracy charges.