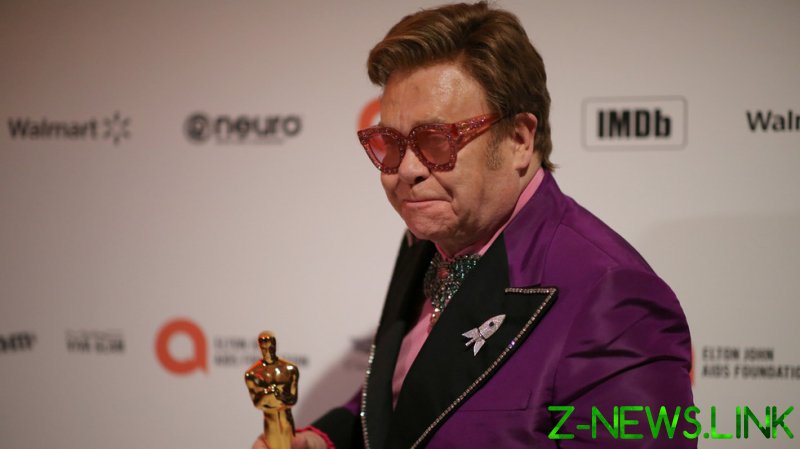 The famed musician told the Guardian in an interview that he was “livid” over the UK government’s inability to secure a deal with Brussels that would have made post-Brexit travel easier for British musicians touring Europe.

“They made no provision for the entertainment business, and not just for musicians, actors and film directors, but for the crews, the dancers, the people who earn a living by going to Europe,” he said, adding that attempts to lobby politicians about the issue have yet to produce results.

John noted that while he and other big stars are able to hire people to “fill in the forms and get visas done,” for many musicians starting off in the industry, the red tape poses a formidable barrier. He expressed exasperation over the fact that while the government seemed preoccupied with protecting the British fishing sector – which brings in £1.4 billion ($1.9 billion) each year – the £111-billion ($154 billion) entertainment industry was left out to dry.

“I’m all for the fishermen, but we’re talking about more than a hundred billion pounds of difference here, and we weren’t even thought about! ‘Oh well, the arts: they don’t matter,’” he fumed.

When pressed to explain why he thought the problem wasn’t getting more attention, John quipped: “The government are philistines. We’ve got used to governments – especially the British government – just telling us lies every day, and I don’t feel OK with that.”

He went on to grill the UK government over “what it did with the NHS,” arguing that it was a travesty that medical workers only received a 1% salary increase during the coronavirus crisis.

“It makes me so angry. I’m 74 years of age and I just don’t get this unfairness and this ridiculous ability to lie through your teeth every f**king minute of the day,” he vented.

His anger seems to have resonated with many Brits on social media, who expressed similar disgust with the Tory government.

Bob Hardy, who plays bass for the band Franz Ferdinand, thanked John for using his voice to call attention to the “damage Brexit will do to emerging artists.”

“Young British artists are being screwed by the lack of government support to help the arts post Brexit. We knew this would happen, we’ve said it repeatedly and here we are,” another commenter observed.

One Twitter user urged John to write a song about the issue, predicting that it would get the message across better than the “rubbish media.”

Not everyone heaped praise on the pop star, however. Several people said that Brussels was to blame for musicians not being exempt from visa requirements, while others suggested that Britain was lucky to pull out of the “failing” bloc.

The controversy over post-Brexit travel for musicians has led to finger-pointing from both sides. Michel Barnier, the EU’s chief Brexit negotiator, alleged that the British rejected an offer from Brussels to create a special exemption for performers touring Europe. London, however, insisted that the EU is to blame for no deal being reached on the matter.