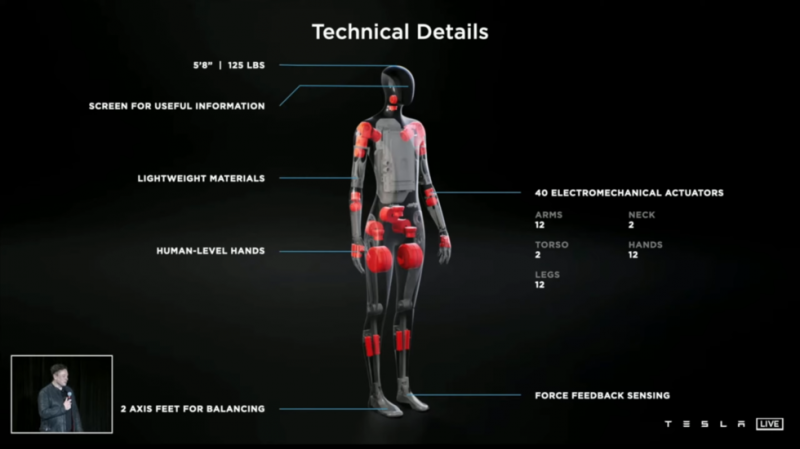 Last week’s Tesla recruitment bonanza in Palo Alto ended with what is perhaps one of the most childish presentations seen in Silicon Valley for years: a person in a tight white suit, their head encased in black, robot-walked onto the dark stage to blaring Techno music, began to Charleston, mimicked the running man, waggled their shoulders, and extended their arms into jazz hands to introduce the ‘Tesla Bot’ – a humanoid robot for performing repetitive tasks – of which, Elon Musk promised, a prototype would be delivered next year.

Of course, this was just hype. However, one wonders who in their right mind would be tempted to join Tesla after watching such nonsense. But there is a serious side to this. The ‘Tesla Bot’ draws on some of its technology, though mainly the Artificial Intelligence the company has developed for vehicles, and its much-hyped vision of self-driving cars.

The problem is not simply the gap between claims and reality.

Two years ago, at an event about automation, Musk, the co-founder and CEO of Tesla, projected that more than a million Tesla vehicles would be able to operate without a driver by the middle of 2020, positioning the company to launch a robot taxi service. All they have achieved so far are cars limited to simple tasks like changing lanes and navigating parking lots. And now Tesla’s Autopilot is under investigation by the National Highway Traffic Safety Administration in the wake of 11 crashes since January 2018.

But hype delivers investment. Despite delivering far fewer vehicles than more-established rivals, and despite the non-delivery of an autonomous driving future, Tesla has risen to become the world’s most valuable carmaker as investors bet in part on the potential of its technology.

Herein lies the danger. Some of this technology has impressive capabilities. But the idea that AI can replicate or surpass human capabilities is a highly worrying one.

Humans may not be as good as computers at maintaining constant vigilance, and may be slow to react in some circumstances, or may even be cognitively compromised (sleepy, distracted, drunk). But AI cannot approximate human cognition and spontaneous problem-solving. Outside of the narrow confines of algorithmic parameters, AI systems cannot problem-solve outside their trained capabilities.

To put it another way, AI systems are dumb. Or better, AI systems are as clever as their human designers can make them. They do what they’re programmed to do…by humans. Facebook’s head of AI, Jerome Pesenti, was spot-on when he posted on Twitter in response to Musk’s exaggerated claims last year that “We are nowhere near matching human intelligence.”

To suggest that these systems can replace or surpass human consciousness is not just to hype this technology beyond the bounds of reality. It is to denigrate human consciousness and what it means to be human. The fact that this idea attracts investors and brilliant young engineers speaks to a profoundly denigrated view of human capabilities.

In this era of super safetyism, the hype surrounding technologies like ‘Tesla Bots’ is driving a profoundly anti-human agenda. The desire to forge a world where everything is predictable and certain, as an algorithm, is a pipedream. This does not make us safer. Calling into question human intelligence makes the world more dangerous because it undermines the human capacity to problem-solve.

The irony is overwhelming. Musk and others are using human intelligence to develop systems that will reduce our reliance on human problem-solving. They are not solving a problem, just creating an even greater one. The existence of AI is a testament to how ingenious humans are. Instead of trying to displace humans, this technology should be used to make human life on earth better by exploiting it to make our problem-solving capabilities even greater.