Home / WORLD / Elon Musk’s comedy debut crashes and burns on the SNL launch pad, but the mission was ultimately a success for him

Elon Musk’s comedy debut crashes and burns on the SNL launch pad, but the mission was ultimately a success for him 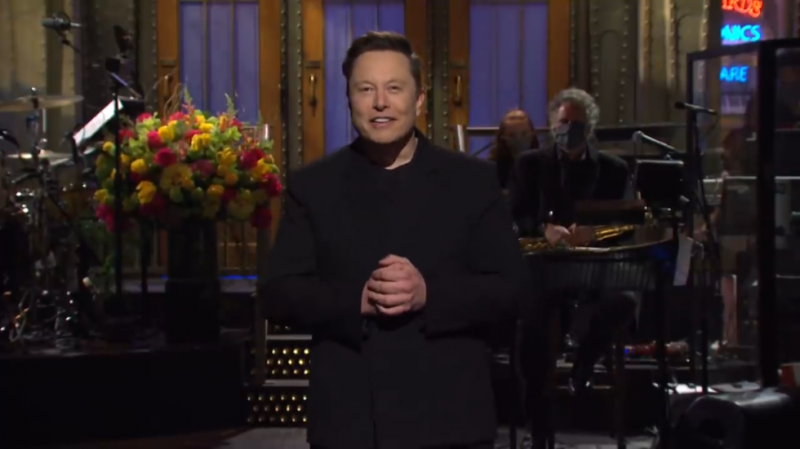 To Musk’s great credit, he was totally out of his element but gave it his all and even poked fun at himself, but sadly, he was painfully unfunny. From the opening monologue, which included not only some stale O.J. jokes but an admission that he suffers from Asperger’s and struggles to act human, Musk came across like some bizarre Andy Kaufman character.

Unfortunately, being the second-richest man in the world and a genius at making cars and rockets don’t translate into being funny, which was uncomfortably evident on Saturday night. On the bright side, Musk’s lack of comedic ability meant he fit right in with the rest of the SNL cast, which is a who’s who of “who’s that?” and features some of the most talentless dopes and dullards imaginable.

It isn’t Elon Musk’s fault that last night’s show sucked. The once-mighty SNL has been consistently abysmal for some time now. Long gone are the John Belushi, Gilda Radner and Bill Murray glory days, and comedy powerhouses like Eddie Murphy and Will Ferrell are not walking through that door at 30 Rock anymore. Instead, the dreadfully unfunny Kate McKinnon is the big star of the current cast, which is the comedy equivalent of having a one-legged hobbit be the best player on a basketball team.

When it was announced that Musk would be the guest hosting the show it generated a tsunami of controversy on Twitter and in the media.

That negative narrative was further propelled by cast members Bowen Yang, Aidy Bryant and Chris Redd when they sent out snarky tweets denigrating Musk (which were later deleted) and producer Lorne Michaels letting it be known that cast members could opt out of scenes with Musk if they chose.

Ultimately no cast members boycotted scenes with Musk on Saturday night, and the show seemed not only lame but tame as far as controversy is concerned. But that doesn’t diminish the absurdity of SNL’s hyper-sensitivity regarding any unorthodox thinkers or alternative, contrarian viewpoints. The pre-Musk show uproar only highlighted how far the old comedy warhorse of SNL, which used to be subversive, anti-establishment and edgy, has fallen and shows how it is now the type of stuffy, sensitive, entitled, pampered lapdog to the establishment it used to rightfully lampoon.

Musk is definitely a polarizing figure, but I have to admit… I don’t exactly understand why. I am unquestionably no fan of the billionaire class but the goofy, bizarre, loose-cannon Musk is the version of a billionaire I prefer over the super-creepy, serial killer-looking types like Mark Zuckerberg, Bill Gates and Jeff Bezos.

Make no mistake, Musk is an oddball and egomaniac, but unlike the narcissistic charlatans running the rigged Wall Street casinos that socialize losses and privatize gains, or the self-righteous Silicon Valley overlords who exploit people while suffocating free speech and toxifying the culture, Musk isn’t predatory and actually builds tangible things, like electric cars and reusable rockets.

I assume Musk’s appearance on the show and the controversy swirling around it will probably lead to a slight bump in the ratings, which was obviously the whole point of having him on in the first place. And no doubt there will be Musk haters slamming him for his dreadful performance and cursing Michaels and SNL for giving him a platform.

The greatest concern of these Musk haters though was summed up by late-night comedy veteran Daniel Kellison when he told the Washington Post that the problem with Musk’s appearance on SNL is that it “humanizes problematic people.” God forbid we commit the sin of “humanizing” someone deemed “problematic” by the hordes of hysterical woke inquisitors forever shouting on Twitter.

Well, I hate to tell Kellison and the other Musk haters, but as bad as the Tesla founder was on the show, and he was bad, it definitely did “humanize” him. He was so awkward and uncomfortable on screen it was surprisingly sort of endearing. Musk came across not as some slick billionaire blowhard who is too cool for school, but rather as some regular nerd who gets super anxious and nervous talking to people and being on tv.

So despite Elon Musk being terribly unfunny and the show being as devoid of laughs as the Space Shuttle Challenger disaster, Musk’s appearance was actually a big success for Musk. While he failed at comedy, he did succeed in exposing his haters for their pettiness and in getting me to root for him. I just hope he is better at getting humanity to Mars than he is at getting me to laugh.