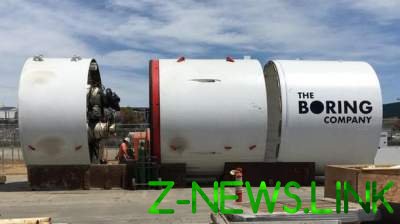 Earlier this year, The Boring Company, founded by Elon Musk, has received the first drilling machine known as Godot

Earlier this year, The Boring Company, founded by Elon Musk, has received the first drilling machine (pictured) called Godot, whose diameter is about 8 meters, length — about 120 meters and a weight of 1,200 tons. The company is trying to improve the performance of the machine in 10 times — to not move at 90 meters per week and for more than a mile.
It was reported that the boring machine dug a 100-meter tunnel from the entrance to the old Park SpaceX in Hawthorne (California, USA). And then the company got permission to increase the tunnel up to three kilometers.

Now, according to TechCrunch, The Boring Company received permission to dug a new tunnel with a length of 16.5 km in the state of Maryland, under the motorway Baltimore-Washington. It is anticipated that this project can be linked Washington and new York; according to the plan, the tunnel will move Hyperloop vacuum train that will be able to overcome the distance between the two cities in 29 minutes.

Probably to the tunnel dug to be used for the second drilling machine which, as he wrote on Twitter Musk, is “almost ready” and received the title Line-Storm (after the poem of Robert frost).