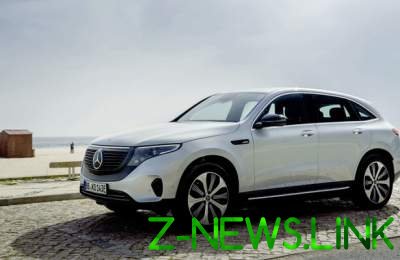 Special version differences are in the nuances of the exterior and interior.

Mercedes-Benz has launched launches the production of its first electric vehicle, crossover EQC and opened reception of orders. Sales started with a special performance named Edition 1886, about the first car of the brand.

A special version of electrocreaser needs to remind the public about the role that Mercedes-Benz has played in the development of the industry of personal transport on the planet. “We are using special version EQC 1886 Edition we remind you about the invention of the car itself and underscore the pioneering spirit that fuels and defines us today more than ever before. It was the first time the revolutionary image of the transformed individual mobility. Car EQC marks another breakthrough into a new era – an era in which e-mobility is a reliable, simple and at the same time exciting,” said member of the management Board of Daimler Britta Seeger.

Special version differences are in the nuances of the exterior and the interior, as well as access to special services, who will receive her customers. Body EQC Edition 1886 can be only one color, which is referred to as “high-tech silver metallic” and the emphasis in the decoration is done in black color. In the interior there were other seats and special floor mats, interior trimmed in a combination of faux leather and microfiber in shades of black and blue Indigo, and a set of equipment included acoustics Burmester and control function by Energizing comfort together with electronic fitness trainer Energizing Coach.

Buyers EQC Edition 1886 will have access to a number of service packages including maintenance for six years, the service “to Pick up and return” (service professionals take the electric car to the owner after service and return it in a specified location), as well as the possibility of extending the factory warranty.

See also:  Of the 68 received state support of Russian films a year has paid off only 8

The crossover is equipped with twin-engine power plant with a return of 408 HP and 760 Nm of torque, and an 80-kilowatt battery with a power reserve of about 400 km. To 100 km/h crossover can accelerate in 5.1 seconds. Basic modification of Mercedes-Benz EQC evaluated in Germany in 71 281 euros, and the version of the 1886 Edition will have to pay 84 Euro 930. About sales opportunities electrocreaser in Russia is not reported.