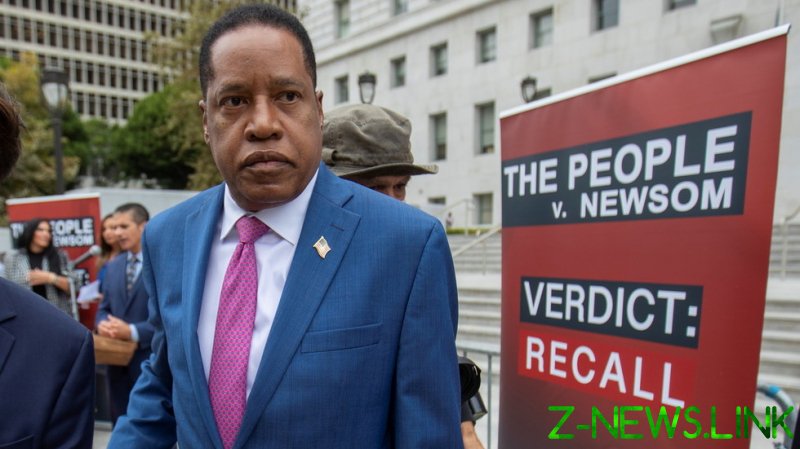 Elder was visiting the Los Angeles neighborhood of Venice on Wednesday when an activist wearing a gorilla mask threw an egg barely missing his head and then punched a member of his entourage.

The black radio talk show host has emerged as the most popular Republican candidate to replace Newsom if the motion to recall the governor passes in the September 14 vote. Mail-in ballots have been sent to the entire state and early in-person voting is already underway.

Democrats, who dominate California politics, have been so alarmed at the possibility of losing the governorship that they sent Vice President Kamala Harris back to her home state to campaign for Newsom. President Joe Biden is expected to do so later this week as well.

Elder has faced scathing criticism in mainstream media ahead of the vote. A recent op-ed in the Los Angeles Times went as far as accusing him of being “the Black face of white supremacy” ostensibly because he espoused conservative views. For instance, Elder was faulted for rejecting the notion that police are permeated by “systemic racism” and calling such thinking a “phony narrative.”

According to the video of the attack recorded by a local media outlet, the bicycle-riding woman in the gorilla mask punched and swore at a member of Elder’s entourage who was trying to keep her away. Another activist yelled at reporters that Elder “doesn’t even like his own people,” referring to African Americans.

While Newsom has been scrambling to enlist the help of big names to rally for him as the recall vote draws near, on Wednesday the LA Times seemed to be doing a victory dance, pointing at the number of mail-in ballots that have arrived so far.

With 6.6 million ballots submitted so far, Democrats outnumber Republicans two to one, according to Political Data Inc, which attributed the surge to $36 million the Democrats and their allies spent on advertising in August – triple the amount spent by pro-recall advocates.

Meanwhile, a group of Democrat computer security experts wrote to California Secretary of State Shirley Weber last week, urging her to order an audit of the recall to protect the outcome from possible manipulation, “litigation and disinformation seeking to discredit the outcome.”