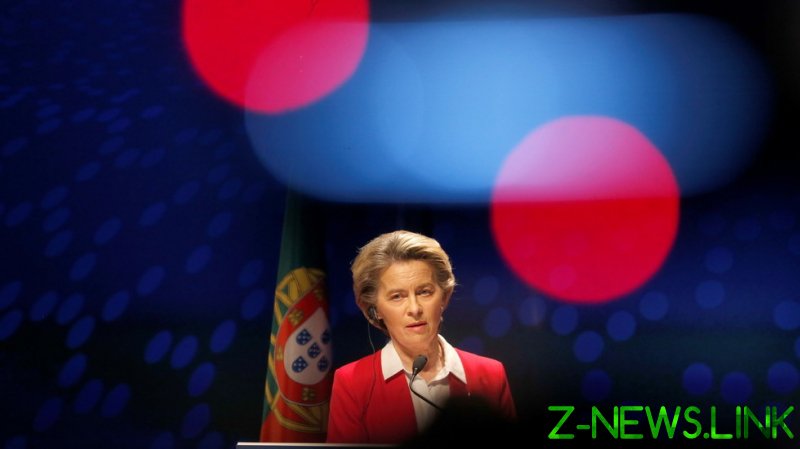 Von der Leyen sprung the idea of a “mutually recognized vaccination certificate” as a “medical requirement” for travel on Thursday in the course of praising a similar plan outlined to her in a letter from Greek PM Kyriakos Mitsotakis.

“It is a medical requirement to have a certificate proving that you have been vaccinated,” von der Leyen told Portuguese reporters.

While Mitsotakis’ plan was not meant to be “compulsory or a prerequisite for travel,” von der Leyen seemed to be leaning in that direction, repeating that “we have to have a medical requirement that proves that people have been vaccinated.” The idea of an EU-wide vaccine certificate “is a political and legal decision that should be discussed at a European level,” she continued emphatically.

This was no doubt news to Europeans unfamiliar with the contents of Mitsotakis’ letter. The Greek leader wrote that it was “urgent to adopt a common understanding on how a vaccination certificate should be structured so as to be accepted in all member states,” and an EU-wide meeting is scheduled for Thursday, at which point Mitsotakis is expected to make the case for certificates “facilitating the freedom of movement of persons who have been vaccinated against Covid-19.”

“It is urgent to adopt a common understanding on how a vaccination certificate should be structured so as to be accepted in all member states,” he wrote. Greece plans to issue digital vaccine certificates to every resident who receives the jab.

Seemingly brainstorming ways to incentivize the uptake of such certificates without imposing an explicit mandate, von der Leyen suggested on Friday that they be combined with Covid-19 tests for those unable to access the vaccine in a timely fashion. Such a package would allow for greater travel to warm-weather destinations – a must for EU member states with tourism-dependent economies concerned that a second year in a row without pleasure travel will destroy them.

Brussels insists it has obtained enough of the Pfizer-BioNTech and Moderna vaccines to inoculate every European , and von der Leyen has forbidden member states from making their own side deals. However, defiant Hungary has already reached a deal to buy China’s Sinopharm vaccine, with Hungarian Prime Minister Viktor Orban saying on Friday that the local regulators must act“responsibly,” but “quickly” to approve the Chinese-made jab. Budapest has been negotiating with Russia for a supply of Sputnik V as well, complaining that the sluggish speed of the EU program will require Covid-19 restrictions to remain in place for “several more months” of unnecessary economic suffering. Nor is it the only member nation that has complained about the pace of the EU’s vaccination rollout.

There’s also confusion about recently-Brexited British citizens’ compatibility with an EU-wide vaccine passport program – or whether the UK is planning to issue the certificates at all. Conservative MP Michael Gove claimed vaccine passports were “not the plan,” a statement echoed by PM Boris Johnson’s vaccine czar Nadhim Zahawi – but not until after Zahawi had already admitted London was “looking at the technology.”

Privacy advocates have warned that vaccination certificates could easily snowball into intrusive global digital IDs, complete with discrimination based on medical conditions, rationing of benefits, and thorny human rights issues stemming from requiring people to be injected with what remain largely-untested pharmaceutical compounds. Thousands of recipients of the Pfizer-BioNTech and Moderna jabs have experienced incapacitating side effects.

Norway is currently investigating the death of 23 nursing home residents who passed away shortly after receiving Pfizer jabs, with 13 of the cases being linked to the side effects of the vaccine.

Meanwhile, Spain plans to keep a database of vaccine refusers which it will share with other “European partners,” effectively relegating vaccine skeptics to second-class citizens.