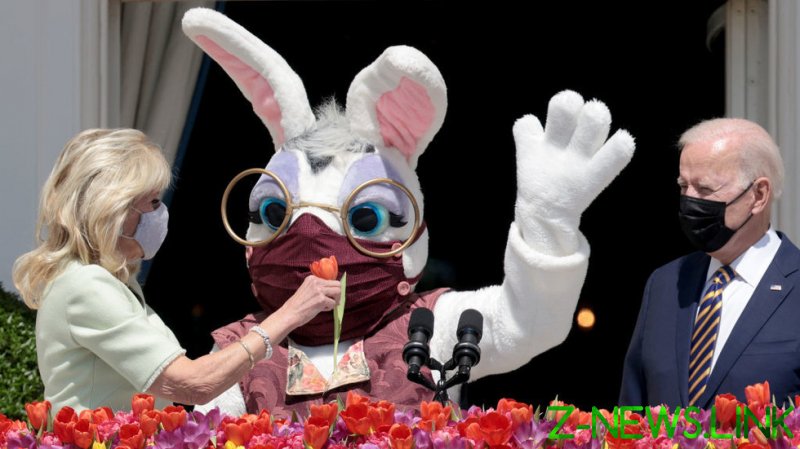 Videos posted on social media suggest that a new aide has been enlisted to steer President Joe Biden away from certain encounters and conversations: the Easter Bunny.

Clips recorded on Monday at a White House event show a costumed staffer intervening at least twice, apparently to direct the president away from potentially fraught situations. The first shows Biden talking to a group of reporters, starting to answer a question about Pakistan and Afghanistan, when a giant bunny wearing a purple dress steps in to cut him off mid-sentence.

The costumed staffer gets between Biden and the reporters, waving both hands in the president’s face, at which point the president turns and walks away from the group.

The second video shows the same bunny intervening again after Biden walks over to a fence to speak to a group of children and parents. The rabbit steps between Biden and the crowd and, just as in the first case, waves both hands at Biden and motions for him to walk away.

The interventions occurred at the Easter Egg Roll, an annual event that attracts thousands of children and parents to the White House grounds. Monday’s festivities marked the first time that the event had been held since 2019, as it was canceled over the past two years because of the Covid-19 pandemic. 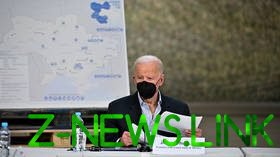 Biden, the oldest US president in history at 79, has made a series of gaffes since taking office last year. Critics, such as former White House physician Dr. Ronny Jackson, have called for him to take a cognitive test to prove that he’s mentally fit to serve as president.

Biden has repeatedly alluded to efforts by White House handlers to choreograph his actions, such as referring to a list he had been given of which reporters to call on at last month’s G7 meeting in Brussels. On Monday, as First Lady Jill Biden was starting to read a book to a group of children at the Easter Egg Roll, the president said, “They’re not going to let me read at all.” Other clips from Monday’s event showed the first lady telling Biden to wave to the crowd after his speech ended and to “just stay” in his seat after the book-reading ended.

As Breitbart reporter Charlie Spiering noted, a Twitter post on Monday by White House press assistant Angela Perez suggested that she might have been the staffer in the bunny costume. Perez tweeted a picture of a person in the same costume, saying in the caption, “Hopping on a Zoom call.”