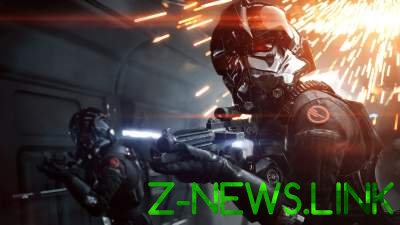 Now all the progress in Star Wars Battlefront II is based solely on the gameplay.

The hurricane of events around Star Wars Battlefront II all does not subside: the pressure of public opinion was so strong that Electronic Arts decided to remove microtransactions from the game. But, of course, not forever.

The corresponding message the company posted on social networks and on the official website. A few hours before the full release EA off the goods for real money in Star Wars Battlefront II. Therefore, users can no longer buy the crystals and, consequently, those same containers, which started all the hype.

Now all the progress in Star Wars Battlefront II is based solely on the gameplay. You will get to open the containers, but will not be able to spend a tidy sum to buy more luchboxes to bypass gameplay.

EA says that has made these changes after discussions with the community. However, the company does not hide: the real money will come back. But only when EA and DICE to build and implement an updated in-game economy, which will be happy all (or almost all) players of Star Wars Battlefront II.

Publishing highlights: Star Wars Battlefront II will continue to grow and develop. Therefore, most likely, the buzz surrounding the microtransactions will not affect the flow of free content. For example, the schedule updates for December it is already known that new maps and characters should come out when planned.

Earlier statements EA has surfaced some interesting news. In comments to GameSpot, the publisher said: it does not consider containers with random items in Star Wars Battlefront II gambling entertainment. Thus, the company responded to the suspicion by the government of Belgium.

In addition, VentureBeat says that a few hours before disconnecting the microtransactions, the head of Electronic Arts Andrew Wilson (Andrew Wilson) was on the phone with the CEO of The Walt Disney Company Bob Iger (Bob Iger). So there is a chance that the decision by EA to remove the micropayments not in the least affected the owners of “Star wars” from Disney.