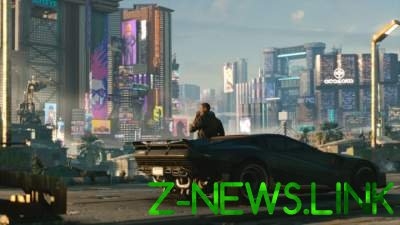 Cyberpunk 2077 is a RPG in the first person.

Polish Studio CD Projekt RED, as promised, held at E3 2018 closed presentation cyberpinball the ambitious action-RPG Cyberpunk 2077 for a narrow circle of representatives of the relevant press. Also, the developers showed arts with images of the protagonist.

– Cyberpunk 2077 is a RPG in the first person, but the cut-scenes the camera will show what is happening from a third party;

– main character name is VI (V), the player he chooses gender and appearance, and defines his biography, which will affect the plot;

it will be possible to travel around the city by car and while driving to switch camera view. When driving in first person user interface is displayed on the windshield;

– while traveling outside the vehicle interface (only a compass and a list of the current active job), and when shooting the screen displays various information about the enemy;

– as in the series The Witcher the job, you must take from the NPC, and during conversations you can choose different answers;

– replica of all the characters in Cyberpunk 2077 is fully voiced;

– access to different parts of the night city will depend on how high the level of your reputation in the city. Also, can be, for example, wear a special jacket that improve this reputation by 5%, allowing you to pass in a previously closed location;

– reputation level in the streets is growing as assignments.

– during the shootings, the damage numbers displayed on the screen by flying numbers;

– the hero is an implant that slows down time when shooting;

– shooting felt slower than in shooters DOOM (2016), but faster than in Fallout 4;

– during the battle the enemy to hack, to explore its weaknesses or deactivate his or her weapon;

– there is an analog “wegmacher of view”, which allows you to explore the environment and extract from it more information;

– in the later stages of the game the main character can run on walls and grow blades from his hands;

just the night city will be 6 regions, did not like each other.

Members of the press who were lucky enough to see the game at a private press screening, argue that in terms of the approach to variability the passage of locations reminiscent of Cyberpunk 2077 Deus Ex: Human Revolution, and such a careful approach to the creation of a massive new world before it was possible to meet only in project Rockstar. If you believe the media, the world of the game affects the amount of detail and quality of study, while the hallmark of the creators of “the Witcher” is felt everywhere, as well as the atmosphere of the cyberpunk of the 80-ies.

Itself CD Projekt RED said that Cyberpunk 2077 is positioned as an adult RPG for the relevant audience.

In conclusion, we invite you to see the game trailer with the voice of CRIS and Geralt of The Witcher 3: Wild Hunt. This video created by a fan with the pseudonym Tolkfan.