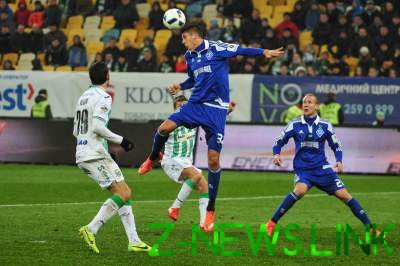 The team of Alexander Khatskevich has forgotten the taste of victories in matches of the championship of Ukraine.

On the eve of “Dynamo” on departure has missed a victory over “Karpaty” (1:1). Series Kiev without a win in the Premier League now stretches to five games, a club record.

The last time Dinamo won the championship of Ukraine on 17 September, when a solo goal by Vitaly Buyalsky has allowed “it is white-blue” stop “Olympic” (2:1).

The previous record of “Dynamo” in the championship of Ukraine was established 10 years ago, when the “white-blue” in four matches against Shakhtar, Arsenal,
“Chernomorets” and “Dnepr” was painted with three draws and one lost.

“Dynamo”, having in mind an open match with “Mariupol”, after 14 rounds behind Shakhtar on seven points. The next match in the Premier League will play Kiev 5 Nov against “Vorskla”.