Home / sports / Dynamo Kiev could not beat the “Alexandria”

Dynamo Kiev could not beat the “Alexandria” 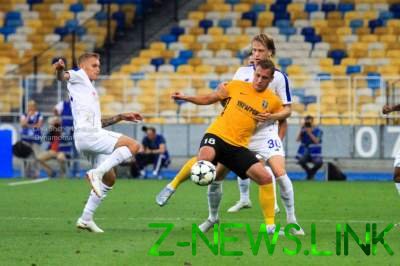 Kiev “Dynamo” in 27-m round of the championship of Ukraine shared the points with “Alexandria”.

The guests took the lead after the first meaningful attack Tsurikov from the left flank into the penalty area, the ball after a few bounces was on the far post, where he was on duty the lone Fedorchuk, who could expose his leg in front of the empty goal.

“Alexandria” played the second number, “Dynamo” tried to create sharpness in the positional attacks. The end of the half, the teams exchanged points – Sitalo from ten metres has punched above gate, and a spectacular shot Kravchenko in a beautiful jump dragged Pankiv.

See also:  The defense budget of the US could grow by $ 30 billion

The second half began with getting Shaparenko the crossbar, and 20 minutes later, the ball appeared in the goal of FC oleksandriia. Tsygankov broke up a quick counterattack and laid the ball under the blow Rusin – Nazar coolly struck the goalkeeper pivot foot.

“Dynamo” in the end tried to snatch the three points, but apart from a few crosses Kiev in front of goal does not remember.
According to the results of the 27th round of the “Dynamo” in the title race risks falling behind Shakhtar on 9 points. “Alexandria” in the struggle for bronze has increased the separation from “Dawn” to 10 points.

In 28-m round “the Dynamo” will “Dawn” and “Alexandria” will go to Kharkov for the match with Shakhtar.