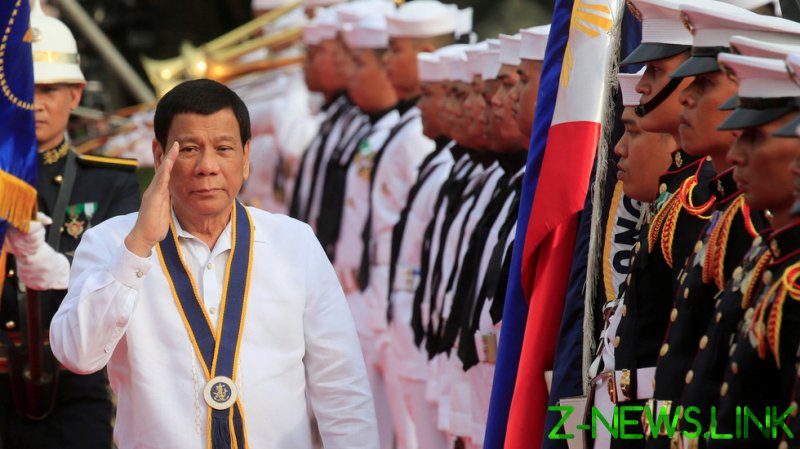 “I will send my grey ships there to stake a claim,” Duterte said in a speech on Monday, explaining that he is not interested in a quarrel over fishing, but that he would protect “our oil.”

The president’s announcement of a potential show of military strength comes after political opponents warned him against bowing to Beijing amid alleged Chinese incursions into the Philippines’ exclusive economic zone (EEZ).

Opposition senator Leila de Lima said in a statement last week that Duterte’s “policy of groveling before China” risks the Philippines becoming “another one of China’s satellites.”

China has repeatedly denied allegations it has encroached on the Philippines’ territory unnecessarily and said it wants only to “safeguard” its own territorial sovereignty and maritime rights.

Duterte has tried to build bridges with Beijing in recent years, saying that he wants his country’s ties with China to remain friendly.

He has also said that the Philippines is not able to exercise its jurisdiction in the South China Sea, which many Filipinos call the Luzon Sea, due to China’s power, despite an international arbitration tribunal in 2016 recognizing the Philippines’ sovereignty over its EEZ.

In 2018, China and the Philippines signed a memorandum of understanding over oil and gas reserves in the South China Sea as they agreed to cooperate over energy in the region.

However, last October Duterte approved a proposal by the Department of Energy to resume oil and gas exploration in the disputed ocean.

Since last month a fleet of Chinese boats was reported to have been moored at the Whitsun Reef, which is part of the Spratly Islands archipelago in the Philippines’ EEZ, but is claimed by governments of both countries.