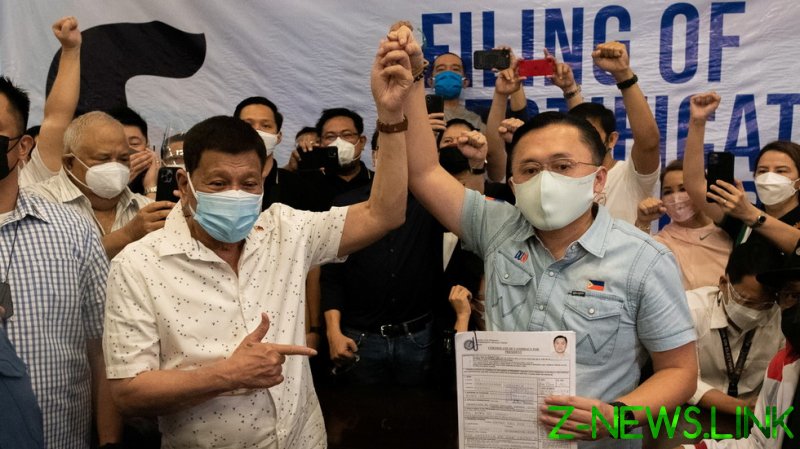 “I am withdrawing from the race. Having said this, I leave my fate to God and to the Filipino people as I vow to do my best every day to serve selflessly and tirelessly,” Senator Christopher ‘Bong’ Go told reporters in San Juan City on Tuesday.

Go noted that his family was opposed to his presidential bid and claimed that Duterte “understands and respects” his decision to bow out.

A long-time deputy to Duterte, Go received the president’s endorsement earlier this month, and was seen as his favored successor to the presidency up until this moment. Go had previously declared a run for vice president, but withdrew soon after the president’s daughter, Davao City Mayor Sara Duterte-Carpio, entered the race.

Go told CNN Philippines that he would support whichever candidate Duterte decided to back, and noted that he had not yet endorsed anyone else for the presidency.

The lawmaker reportedly hinted at some reservations about his candidacy earlier this month, with presidential adviser Jacinto Paras telling Rappler that Go was “still contemplating [his bid] because he is overwhelmed with so much work as a senator,” but added at the time that his doubts were assuaged after receiving support from a number of visiting governors.

The latest political shakeup comes after Duterte declared that he would run for a senator’s seat in the upcoming May 9 race, as he was not eligible for reelection as president under Philippine law. With Go out of the running, top contenders for president include Ferdinand ‘Bongbong’ Marcos Jr. – the running mate of Duterte’s daughter and the son of the late strongman Ferdinand Marcos – sitting VP Leni Robredo, as well as boxing legend Manny Pacquiao, who retired from the sport in September to run for the presidency.

While presidents and vice presidents typically run on a combined ticket under the same party in Philippine elections, the positions are voted for separately, meaning candidates from different parties could end up taking each spot.