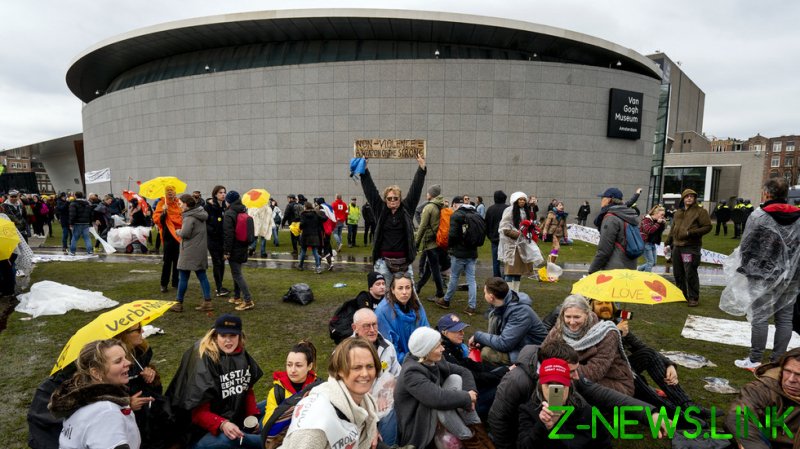 The anti-lockdown rally gathered on Saturday in Amsterdam’s Museumplein, a green open space named for the three national museums located in the area. The protest took place without a permit from the municipality, so the police declared Museumplein a security risk area, threatening a possible crackdown on those gathering there. This didn’t stop a large crowd of activists from coming and mingling with ordinary people, who frequently hang out at the museum neighborhood on weekends.

Some of the protesters were dressed in medical garb or military uniforms, though more exotic outfits were also seen.

Many brought colorful umbrellas, which proved to be wise considering that the police used a pair of water cannons to shoot over the protesters, apparently nudging them to leave. The crowd chanted slogans like ‘Love, freedom, no to dictatorship’ and sang ‘You’ll Never Walk Alone’.

The police came prepared for a possible riot, armed with shields and protective gear, and brought police dogs with them. The situation, however, remained mostly peaceful, and the protesters ultimately left the area and walked away en mass.

The police said they took action after a group of 500 people came together and refused to leave as instructed. The number is the upper limit allowed for mass gatherings in the Netherlands at the moment, provided participants keep at least 1.5 meters from each other.

Similar anti-lockdown protests were scheduled for Saturday in other nations, including Sweden, Germany, the UK, and others.