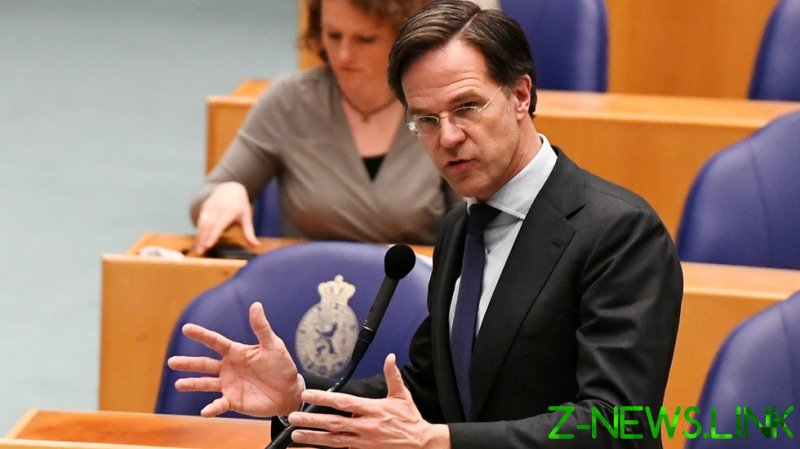 Parliament passed a motion of disapproval rebuking Rutte early on Friday, saying he had “not spoken the truth” about ongoing talks to form a new government, namely discussion about the repositioning of another high profile lawmaker and vocal critic of the PM, Pieter Omtzigt.

The vote followed a separate no-confidence motion that failed to pass earlier on Friday, which would have forced Rutte’s resignation. He recently secured reelection in the March 17 parliamentary race, where his center-right People’s Party for Freedom and Democracy took more seats than any other faction. Rutte is now tasked with forming a new ruling coalition, though the process has all but stalled amid the controversy.

Rutte’s troubles began after a top negotiator in the coalition talks – Kajsa Ollongren of D66, a centrist party – was photographed carrying notes on the discussions. On one of the documents, a line reading “Position Omtzigt. Position elsewhere” was legible, referring to an MP from the Christian Democratic Appeal Party.

Last week, however, Rutte denied that Omtzigt came up in the talks, a claim soon proven false after additional notes leaked showing that he was indeed discussed. The PM insisted on Thursday that he had answered reporters’ questions about the negotiations “in good conscience” and that he simply did not remember any mention of the lawmaker. “I am not standing here lying. I am telling the truth,” he said.

Omtzigt helped to uncover a major scandal involving a Dutch tax agency and childcare benefits, in which the tax collector was found to have wrongly accused families of fraudulent welfare claims in order to claw back the money. Coming to public light in 2018, the controversy ultimately prompted Rutte’s entire cabinet to resign in January.

Ahead of Friday’s no-confidence vote, Rutte – nicknamed ‘Teflon Mark’ after surviving a number of other scandals during his decade-plus in office – pleaded with lawmakers to allow him to retain his position, saying “I want to continue with that and form a new coalition with other parties to run this country. And I hope that I get enough confidence for that.” For now, he will keep the job.