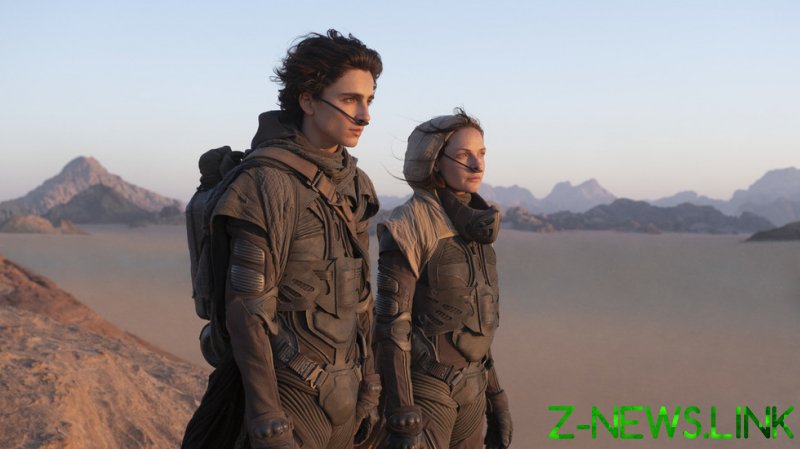 ‘Dune’ is a complex and complicated story of empires and religious mysticism set in a future that is structurally not too different from the medieval past. It’s sort of, but not exactly, a cross between ‘Lawrence of Arabia’ and ‘Star Wars’…but nowhere near as good as either.

In ‘Dune’, the planet Arrakis, a barren and desolate sandscape, is a key piece on the political chessboard because it’s the only place in the universe that has “spice,” which is both a hallucinogenic drug used by the Fremen – the Bedouin’s of Arrakis, but more importantly, a vital fuel that makes interstellar travel possible. Obviously, ‘Dune’ is a loose metaphor for various empires’ lust for oil in the Middle East over the years.

The machinations that bring the rulers of House Atreides, Duke Leto (Oscar Isaac), Lady Jessica (Rebecca Ferguson) and their teenage son Paul (Timothee Chalamet) to Arrakis by imperial decree to replace the brutish House of Harkonnen, which has ruled the planet for generations, are never clearly spelled out in the film.

In fact, much of what happens in the film is not clearly spelled out, which is why the movie is so impenetrable for those who haven’t read the book. Fortunately for me, I’ve read enough of the book to know what was happening, but unfortunately not enough to know why it’s happening.

The film is actually just ‘Part One’ of ‘Dune’, and one can’t help but wonder if Warner Brothers is waiting to see how well the movie does at the box office before greenlighting further films.

It seems to me that the problem for ‘Dune’ is that it’s much too esoteric and unexplainable to be able to generate enough of a box-office bonanza to induce funding for a second picture. This is also why the notion of ‘Dune’ generating Star Wars/Marvel levels of excitement among audiences seems highly unlikely.

An issue with ‘Dune’ is that, unlike the first ‘Star Wars’, it isn’t a stand-alone movie. ‘Star Wars’ had a very satisfying ending all its own – the destruction of the death star. The film’s sequels only added to that experience, they didn’t make it. With ‘Dune’, the ending of Part One is in no way satisfactory, and it’s relying on future films to elevate the audience’s experiences.

In fact, Dune’s climactic scenes are so mundane and dramatically insignificant it feels like the main story hasn’t yet begun when the final credits roll.

What makes the Marvel franchise so successful is that it can be glorious for audience members who know the source material, as well as digestible and entertaining for viewers who’ve never read a comic book in their lives.

The same is not true for ‘Dune’. If you haven’t read ‘Dune’, you will, like the US when it rolled into the Middle East thinking it would impose its will over cultures it didn’t know or understand, be overwhelmed by your ignorance and arrogance. The ‘Dune’ illiterate will be bogged down by their own ignorance-induced boredom, as the muck and mire of world building is a maze for which they lack a map. Forever lost amidst the dust and dizzying detritus of ‘Dune’, first-timers to the story will feel like foreigners and will quickly check out.

Villeneuve, the French Canadian movie director, is known for making gorgeous looking films, the proof of which lies in the stunning cinematography of ‘Sicario’, ‘Arrival’, and Blade Runner 2049, and ‘Dune’ is certainly no exception.

The movie is a visual marvel, and if that’s your cup of tea then I highly recommend you see the movie in theaters as opposed to on HBO Max. It really is impressive to behold. But with that said, Villeneuve’s visual feasts are often vast and stunning, but they can also leave you hungry for drama and humanity, and Dune is a perfect example of that.

Timothee Chalamet is the film’s lead and to be frank, he has always been a mystery to me. A pretty boy with little substance and no physical presence, he feels like a manifestation of a pre-teen girl’s platonic fantasies.

Chalamet is a wisp of a human being and is devoid of the intensity and magnetism to carry a single movie, never mind a big budget franchise.

I suppose Chalamet is just eye candy, another weapon in Villeneuve’s prodigiously gorgeous cinematic palette. But like much of Villeneuve’s beautifying flourishes, Chalamet feels entirely empty, like a miniature statue of David, or a high-end department store mannequin.

Ultimately, I enjoyed ‘Dune’ as a cinematic experience because it’s such a beautifully photographed film, but I also understand that my interest in cinematography is not shared among the general populace. And I readily admit that this movie may very well flop, which is disappointing because as frustrating as it is, I’d still like to see Villeneuve make one or two more ‘Dune’ films as the sort of high-end alternative to other less visually ambitious franchise movies…like Star Wars and Marvel.

Ultimately, fans who loved the book should see ‘Dune’ in theaters as they’ll most likely enjoy the movie as they marinate in Villeneuve’s cinematic grandeur. But if you haven’t read the book, ‘Dune’ is, like Arrakis, a very forbidding and foreboding land that is best avoided.