Ducati has released an anniversary version of the model Monster 1200 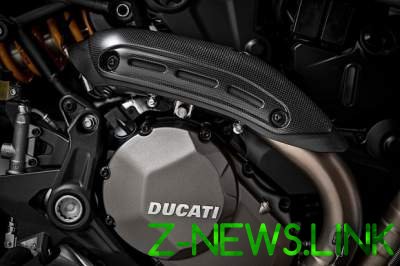 The appearance of this motorcycle is timed to the anniversary of twenty years since the release of the first copy of this legendary naked. The normal version of the anniversary motorcycle bike universal feature insert colors of the Italian flag on the nose kit on the fuel tank and on the cover of the passenger seat. And the logo “25 years” on the seat.

The frame is painted in a Golden color, and wheels – Marchesini forged. A number of elements made of aluminum, a number of carbon fiber – all this also underlines the exclusive character of the anniversary version. Drives the motorcycle standard 2-cylinder engine, outstanding 147 HP at 9 250 rpm./min. and maximum torque of 124 Nm at 7 750 rpm./min.

Chassis – tubular frame and single-sided swingarm in aluminium with fully adjustable Ohlins shock absorber. Brakes – two discs Brembo 330 mm. “Monster was first presented in Cologne at a trade fair in 1992, production started on the 5th March 1993, and in just a few years, the motorcycle has gained legendary status in the world of bikes”, – stated in the message of the Ducati. “A model marked the beginning of a category “naked sport bikes”, and around it grew up and rallied a tight knit community of pilots, fans of the Monster”.

See also:  In the US "dismantled" three dozen cars right in the Parking lot of the dealership

Anniversary motorcycles will be produced only 500 units. It is expected that by the end of the year they will be all sold out. And possibly faster. The retail price of the device on the European market – an average of about 19 660 euros.