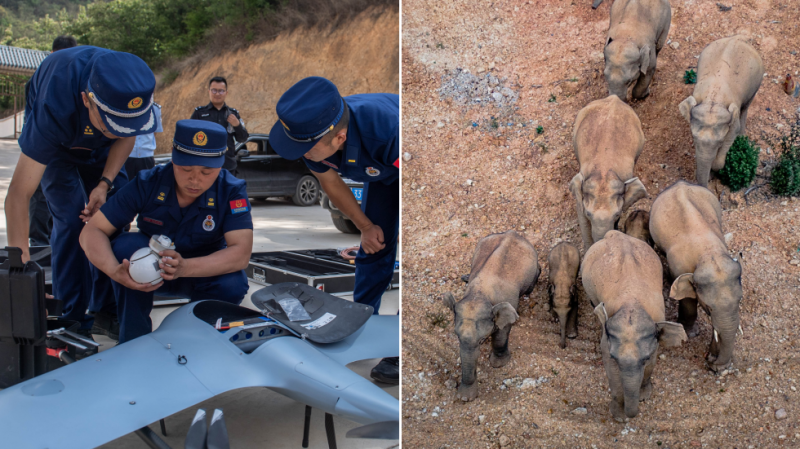 The herd started on its way from a natural reserve in the southern Xishuangbanna Dai Autonomous Prefecture and trekked about 300 miles (500km) over more than a year. On Sunday, a special command formed in Yunnan province to monitor and hopefully direct the migration, and it deployed 14 drones to check on the elephants’ progress.

It also mobilized 510 people and over 110 vehicles in an attempt to block roads and divert the animals away from the provincial capital, Kunming, towards less-populated rural areas, the news agency Xinhua reported.

Asian elephants are a strictly protected species in China. That particular wild herd, which had journeyed further north than any other of their kind before them, has captivated the imagination of the Chinese people. Clips showing the trunked travelers navigating evacuated roads, helping themselves to human food and water and, on one occasion, depleting a village’s reserves of booze, have been spreading like wildfire on Chinese social media.

For the local farmers, however, the unstoppable herd looks more like a locust plague. The untouchable animals have already caused an estimated $1.1 million worth of damage and are not expected to stop their ransacking anytime soon. The authorities are cautioning people to keep their distance because, if frightened or angered, they may injure or kill onlookers.

It’s not clear what triggered the long trek, which started in March 2020. Some experts suggested it is a testament to China’s success in preserving and increasing its Asian elephant population. The herd started at 16 heads, but has parted ways with some members, while a few baby elephants were born during the trip. It’s unusual northbound path remains a mystery to scientists.