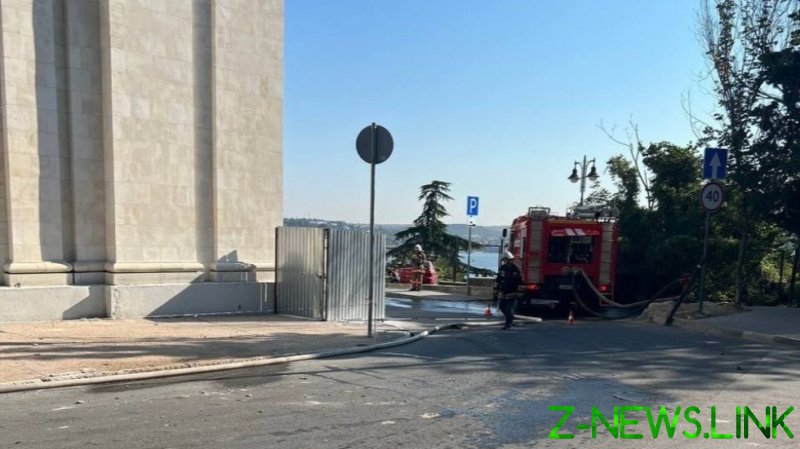 A Ukrainian drone crashed into the headquarters of Russia’s Black Sea Fleet in the Crimean port of Sevastopol on Saturday morning, Governor Mikhail Razvozhayev has said.

The low-flying UAV was spotted approaching the city from the bay, but was only shot down once it was above the headquarters.

The drone crashed into the roof of the building and caught fire, Razvozhayev said on Telegram, adding that the work of Russia’s air defenses allowed damage from the indecent to be minimized.

The governor said there were no casualties or significant damage resulting from the attack, which he blamed on Ukraine.

The HQ was struck by a drone in late July, leaving six people wounded and prompting the cancellation of Navy Day celebrations in Sevastopol.

Shorty after the incident in Sevastopol, Crimean Governor Sergey Aksyonov said another drone had been shot down in the west of the peninsula.

The Crimean governor’s aide, Oleg Kryuckov, said on Telegram that the aim of the ongoing drone attacks was “not military, but psychological” as the UAVs only carry a small payload of explosives, unable to cause extensive damage. He advised the population to stay clam and report any suspicious activity to the authorities.

There were also several reports of air defenses being activated in various part of Crimea over incoming UAVs on Friday.

On Tuesday, a temporary ammunition depot in northern Crimea was targeted in what the Russian Defense Ministry called an “act of sabotage.”

Last week, a fire and series of explosions at the Saki airfield in the western part of the peninsula left one person dead and 14 others injured.