Home / WORLD / Drama over Amnesty’s Navalny move raises important point: prisoner of conscience tag shouldn’t be reserved only for those we like 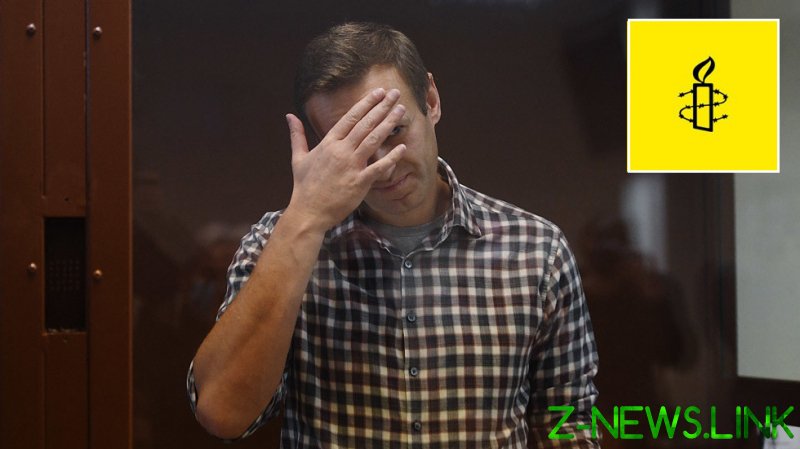 A prisoner of conscience, simply defined, is somebody who is imprisoned because of his or her religious or political beliefs. The term is value-free. It doesn’t matter what you believe, or the nature of your character; if your beliefs land you in jail, you’re a prisoner of conscience. You can be quite revolting, but the label still fits.

One might say that there are limits – some things are so beyond the pail that no civilized society can accept them. But even then, just believing something obnoxious is not normally considered a reason for imprisonment – you have to do something to promote those obnoxious beliefs, in which case you’re not a prisoner of “conscience” but of something else.

But what if you simultaneously express two sets of ideas, one of which could legitimately be considered so extreme as to be unacceptable, and one of which could not, and you are then arrested because of the latter and not the former? Are you still a prisoner of conscience? It would seem so, because your socially unacceptable views are not relevant to your imprisonment.

Amnesty International seems to disagree. The well-known organization declares that: “We help fight abuses of human rights worldwide. We bring torturers to justice. Change oppressive laws. And free people jailed just for voicing their opinion.” In pursuit of the last goal, Amnesty lists people around the world whom it considers “prisoners of conscience” and lobbies on their behalf.

Until this week, the Russian opposition activist Alexey Navalny was among those so listed, following his imprisonment last month for breaching the terms of the suspended sentence he received in a fraud case several years ago. Amnesty International has now stripped Navalny of his prisoner of conscience status, citing a huge number of complaints that it has received concerning allegedly racist comments made by Navalny that Amnesty has concluded constituted “hate speech.”

Navalny’s defenders were quick to point the finger of blame for these complaints at the Russian-born, New York-based writer Katya Kazbek, who had published on Twitter a string of Navalny’s statements, some of which are far too inflammatory to be repeated in polite society. From this Russian connection, it was a short step to blaming the Russian state for Amnesty’s decision, with author Anne Applebaum, for instance, tweeting that“Amnesty caves to a Russian smear campaign.”  Writer Julia Ioffe similarly declared on Twitter that Amnesty had shown that “the Kremlin has figured out how to weaponize cancel culture.”

In fact, Kazbek is about as far from a Kremlin stooge as one could imagine. Described as a “feminist and an LGBTIQ issues freelance writer,” her interests are said to “include the post-colonial struggle in the ex-USSR territories, race, migration, class, sexual violence and queer identities.” Even some of her detractors have to admit that she isn’t a tool of the Russian authorities. Rather, her dislike of Navalny stems from a time she turned up at his campaign headquarters when he was running to be mayor of Moscow, and was appalled at the racist language she claims she heard there.

Such subtleties appear to be lost in the general ruckus. In the current political climate, one has to be either pro-Navalny or anti-Navalny, pro-Kremlin or anti-Kremlin. The idea that one can be anti-Navalny and anti-Kremlin, or at any rate disapprove of Navalny but also disapprove of his imprisonment, seems to be off the cards.

The result has been a strong effort in recent weeks to dismiss Navalny’s disreputable past as meaningless. For instance, in an article in the New Yorker, Masha Gessen sought to portray Navalny’s dalliance with nationalist extremists as a well-intentioned attempt to bring them into the mainstream. Quite how Gessen fits that narrative with Navalny’s often very toxic statements isn’t very clear.

Navalny’s supporters have also sought to blacken the names of those who draw attention to his murky past. In an article published on Tuesday, for instance, journalist Natalia Antonova suggested that Kazbek’s dislike of Navalny was driven by the fact that Kazbek’s father is a wealthy Russian businessman, arguing that she therefore feels threatened by Navalny’s attacks on corruption. Meanwhile, liberal Russian activist Yevgenia Albats tweeted that “Amnesty has long been a bunch of anti-Semites. Now it chose Navalny as its target.” The fact that Kazbek is half-Jewish appears to have passed Albats by.

The attempts to defend Navalny don’t stand up to scrutiny. He truly has said some appalling things. But that doesn’t mean Amnesty’s decision is correct. For Navalny isn’t in jail for saying those things.

Navalny’s prison sentence derives from a case in which he was accused of defrauding the cosmetics company Yves Rocher. In the eyes of many observers, this was a trumped-up charge brought against Navalny because of his political activities. But even if it wasn’t, nearly everything concerning the Yves Rocher case that followed his initial sentencing was clearly political in nature.

First, Navalny’s original prison sentence was changed to a suspended sentence. Then, he consistently broke the terms of his probation, but no action was ever taken. The implication was obvious – Navalny had what Russians call a ‘roof’, in other words somebody in power was protecting him.

Then, suddenly, the Russian authorities declared that Navalny’s breaches of his probation required that his suspended sentence be turned into a real one. What had changed? The only reasonable answer is that Navalny had lost his roof – i.e. a political decision had been made to lock him up.

Amnesty International acknowledges this. In announcing that it had deprived Navalny of his prisoner of conscience status, the organization also declared that it considered his jailing “political.”

But that makes no sense – if his imprisonment is political, then he is a prisoner of conscience, especially as the crime for which he is serving time has nothing whatsoever to do with the comments that Amnesty considers hate speech.

Amnesty has been burnt in the past by associations with political prisoners it later regretted. An example is Myanmar’s Suu Kyi, recently deposed in a military coup. For years Amnesty pleaded Suu Kyi’s cause when she was in prison, only to be embarrassed after she came to power and was accused of abusing the human rights of Myanmar’s Rohingya minority. Perhaps this has prompted Amnesty to think twice about who it endorses.

Still, Amnesty’s decision is politically inept. Navalny is not only a prisoner, he is also someone who was recently allegedly poisoned and almost died. As far as the West is concerned, the only credible suspects in his poisoning yet to be identified are members of the Russian Federal Security Service. By depriving Navalny of his prisoner of conscience status, Amnesty is ignoring this, and in the process could be accused of sending a very odd message to the Russian government.

The reality is this. On the one hand, Alexey Navalny has said some very objectionable things. He’s also refused to apologize for them. On the other hand, in my opinion, the way that the Russian state has treated him is objectionable too. If you start picking and choosing which victims of state oppression you are willing to support depending on whether you happen to like them, you’ll soon lose any credibility as a defender of human rights. Amnesty International is free to do as it pleases, but it has set a bad precedent.