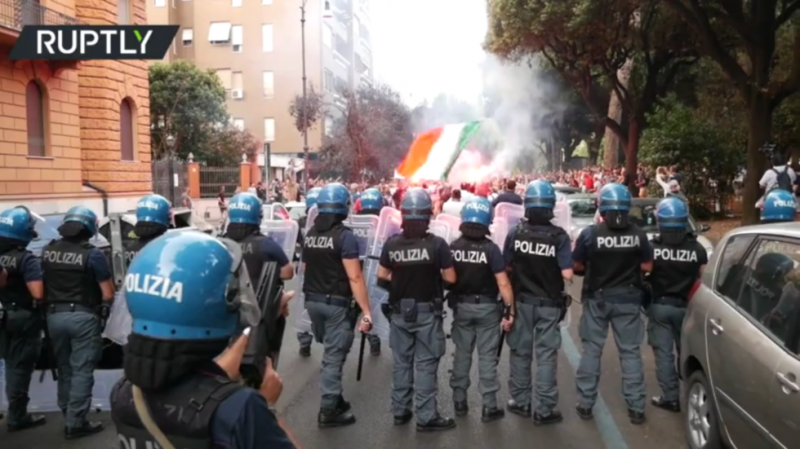 Around 3,000 rallied in Rome and 5,000 in Turin, the capital of the northwestern Piedmont region, while smaller protests were held elsewhere across the country, Italian media said. Overall, demonstrations were reported in more than 80 cities and towns.

People took to the streets to denounce the plan of the government led by Prime Minister Mario Draghi to introduce a health pass, known as the ‘Green Pass’. The document serves as proof that a person has received at least one dose of a Covid-19 vaccine, has tested negative for Covid-19 in the last 48 hours, or has recovered from the virus.

Starting from August 6, only Green Pass holders will be allowed into cafes, restaurants, gyms, and open-air shows.

Protesters view the measure as discriminatory. Some marched with signs that read, ‘Draghi Like Hitler’ and ‘Freedom, No More Dictatorship’, while others carried Italian flags and lit flares.

“We say no to the Green Pass because it creates A-class and B-class citizens – those who have rights and those who have no rights,” a protester in Rome told RT’s Ruptly video agency. “This is against Italy’s constitution.”

La Stampa newspaper reported that some business owners took part in the protest, fearing that the introduction of the pass will lead to a drop in clientele and endanger their livelihood.

Draghi said the Green Pass is necessary to stop the spread of the disease and restart the economy. Some politicians criticized Saturday’s protests.

“Hearing words like ‘slavery’ and ‘Covid scam’ makes me shudder. According to these irresponsible [people], 130,000 deaths were perhaps only imaginary,” Senator Licia Ronzulli from the center-right Forza Italia party said, as quoted by La Stampa.