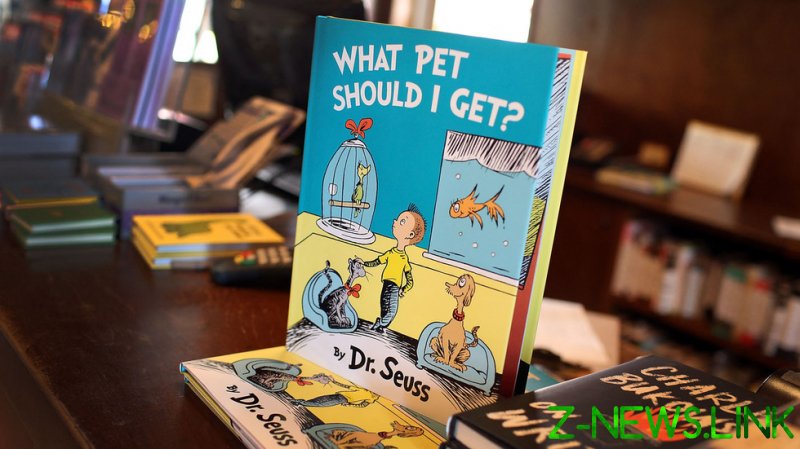 In a statement released on Tuesday, the author’s birthday, Penguin Random House’s Dr. Seuss Enterprises announced that it would stop publishing ‘And to Think That I Saw It on Mulberry Street,’ ‘If I Ran the Zoo’ and ‘McElligot’s Pool.’ The titles ‘On Beyond Zebra!,’ ‘Scrambled Eggs Super!,’ and ‘The Cat’s Quizzer’ will also cease publication and will no longer be licensed to any third parties – meaning second-hand copies sold by resellers may be the only way to read them.

Declaring its support for “messages of hope, inspiration, inclusion, and friendship,” the company said that Seuss’ books “portray people in ways that are hurtful and wrong.”

Ending the sales of the books is “only part of” the “broader plan” to ensure the Dr. Seuss Enterprises’s catalog “represents and supports all communities and families,” the statement concluded.

The company further told Associated Press that it made the decision after listening to “teachers, academics and specialists in the field as part of our review process.”

Some on social media were quick to voice protest at the decision, comparing those responsible to real-world ‘Grinches’ from Seuss’ book ‘How the Grinch Stole Christmas.’

“[You] have to realize the people running this dr seuss organization probably hate him. thats usually how it is,”commented one artist on Twitter, claiming that they “announced it on his birthday, to spite him.”

The announcement was just the latest action against the legacy of Dr. Seuss, whose real name is Theodor Seuss Geisel and whose books have been at the center of a campaign to retroactively cancel him over alleged racism.

President Joe Biden removed mention of the popular American author from this year’s Read Across America Day – which is celebrated on the same day as Seuss’ birthday. This marks a contrast with former presidents Donald Trump and Barack Obama, who had both mentioned Seuss. In 2015, Obama praised the Seuss books’ “whimsical wordplay and curious characters” which had “inspired children.”

Biden’s snubbing of Dr. Seuss is also in stark contrast to his UK counterpart Boris Johnson, who this week told school children of his love for ‘The Cat in the Hat Comes Back.’

Virginia’s Loudon County Public Schools also recently criticized the celebration of Dr. Seuss, declaring, “As we become more culturally responsive and racially conscious, all building leaders should know that in recent years there has been research revealing racial undertones in the books written and the illustrations drawn by Dr. Seuss.”

It is unclear whether Dr. Seuss Enterprises will stop with just the six canceled books or if it will go even further, given that other works by the author – including the wildly popular ‘Cat in the Hat’ – have also been criticized as having racist undertones.