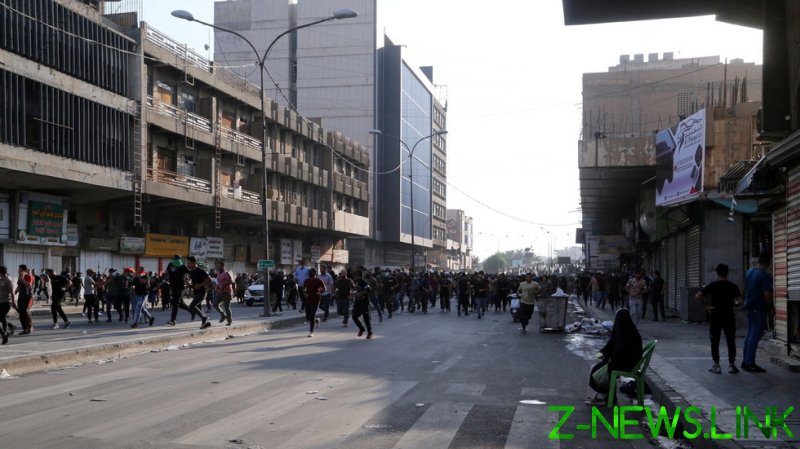 A crowd of some 300 protesters reportedly attempted to break into the heavily fortified Green Zone, housing Iraqi government buildings and foreign embassies – including the US diplomatic compound – but apparently failed to do so.

The protesters also set up tents for a sit-in near the area. The encampment was reportedly burned down on Friday evening.

Videos showed areas of Baghdad on fire and covered with smoke from huge street blazes.

Sounds of gunfire can also be heard on some of the videos, although their source is unclear. Reuters and Al Jazeera reported that police fired live ammunition into the air to disperse the gathered protesters.

The demonstrators are believed to be supporters of pro-Iranian Shiite parties that suffered heavy losses during the latest parliamentary elections on October 10. The parties have challenged the results, alleging vote fraud and in particular ballot counting irregularities. However, the Iraqi election commission has already rejected most of 1,300 appeals submitted by an umbrella group of Shia organizations.

Pending the release of the final result of the vote, the protesters took to the streets on Friday seeing it as “the last chance for the government [and the] election commission to hold a recount of all the votes,” according to Al Jazeera.

The clashes and riots apparently continued into the night, as videos on social media showed the protesters erecting barricades and setting them on fire, as well as burning parked cars.

There have been unconfirmed reports about at least two deaths among the protesters, but the rumors have not been confirmed by Iraq’s Health Ministry. In a statement on Friday, the ministry insisted that most of the 125 injured were security and law enforcement officers, noting that only 27 of those injured were civilians.

No gunshot wounds and no deaths were reported, the ministry claimed, adding  that most injuries were “mild to moderate.”

The early elections held last month were a response to massive 2019 protests against corruption, poor services and unemployment. The vote saw several Shia parties losing support, but the biggest gains were made by a political force led by an influential Shiite cleric Muqtada al-Sadr, which won 73 seats in the parliament out of a total of 329. Al-Sadr’s bloc is now expected to seek coalition partners to form a new government.