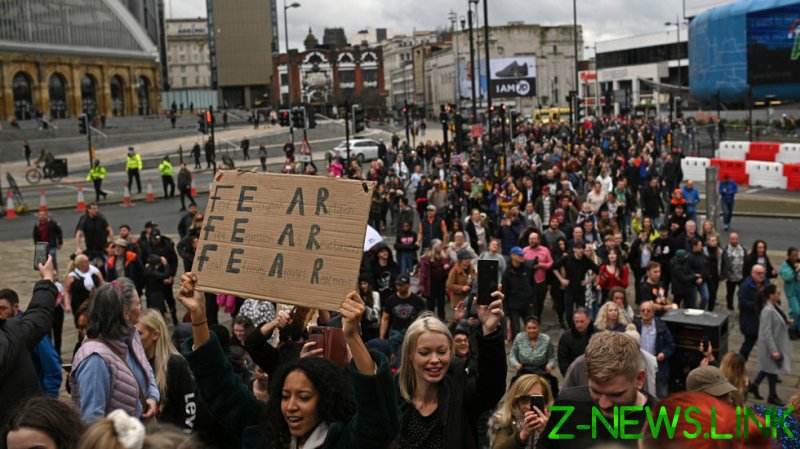 Police said 14 people were arrested in Bristol alone, and at least 25 more in Liverpool, where a massive crowd gathered outside George’s Hall.

Videos shot at the march in Bristol showed police arresting and leading or carrying away protesters, including one man who appeared to be dressed in an animal costume. As they marched, maskless demonstrators chanted, “We are the people, we are the power, we are the 99 percent.”

Among those arrested on Saturday was former Labour Party leader Jeremy Corbyn’s 73-year-old brother, Piers Corbyn, who was due to be the main speaker at the Bristol protest.

A message posted on Piers Corbyn’s Twitter account on Saturday evening indicated that he was still in police custody but remained defiant, as “it will take more than a few bullies to stop him.”

The latest unrest over the UK’s toughened Covid-19 restrictions follows clashes between protesters and police last week in Liverpool and Manchester. The demonstrations have continued despite Home Secretary Priti Patel banning protests throughout a second-stage lockdown that runs through December 2. Britons are banned from meeting with more than one other person in outdoor public places.