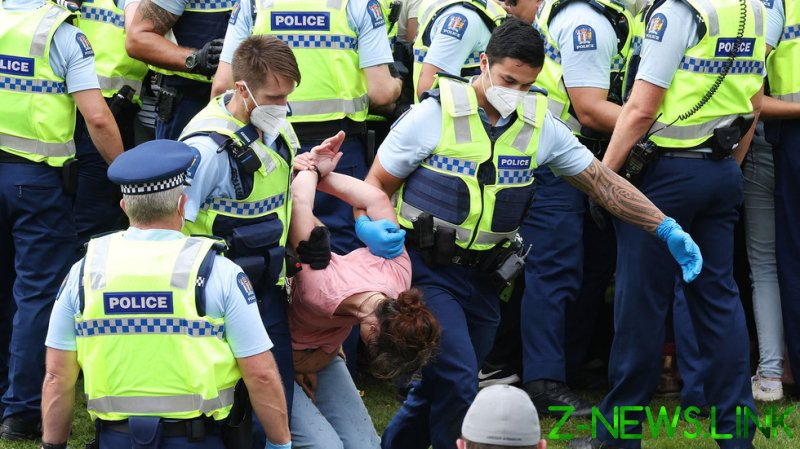 New Zealand police cracked down on protesters outside Parliament in Wellington on Thursday, arresting more than 50 people after forcibly dispersing the demonstration against Covid-19 restrictions.

Shortly before the scuffles erupted, police threatened the crowd of around 150 protesters with arrest if they refused to leave the area voluntarily. Those who ignored the order were subsequently detained by law enforcement.

Protesters could be seen chanting “this is not democracy” and “shame on you” as police officers moved in to clear the grounds.

Footage showed police officers tearing down tents that had been erected by protesters and scuffling with the protesters unwilling to scatter on their own.

“Police continue to appeal to protestors to leave Parliament Grounds peacefully, as the area is closed to the public,” New Zealand Police said in a statement on Thursday.

“We continue to acknowledge people’s rights to protest, however those who behave unlawfully will face arrest,” the statement continued.

By 11:30 am, New Zealand Police claimed to have arrested more than 50 protesters on charges such as trespass and obstruction for remaining on Parliament grounds after they decreed the area closed to the public.

“Wellingtonians have the right to conduct their lives and go about their business without the interference of ongoing unlawful activity,” the police declared, warning that “additional resources” would be “deployed from around the country” to crack down on protests if they continued.

The protesters began blocking the streets surrounding New Zealand’s Parliament on Tuesday in a show of solidarity with the truckers and their supporters in Ottawa, Canada who are currently protesting against Covid-19 restrictions and mandates outside the Canadian Parliament as well as on the US-Canada border.

The New Zealand protesters also oppose Covid-19 restrictions in their own country, which include mandatory vaccination for certain professions, including health, education, emergency services, and defense.