Home / WORLD / Doves out of fashion? CNN & Fox cut Rand Paul’s anti-war speech at RNC as he calls out Biden for backing wars in M.East, Serbia

Doves out of fashion? CNN & Fox cut Rand Paul’s anti-war speech at RNC as he calls out Biden for backing wars in M.East, Serbia 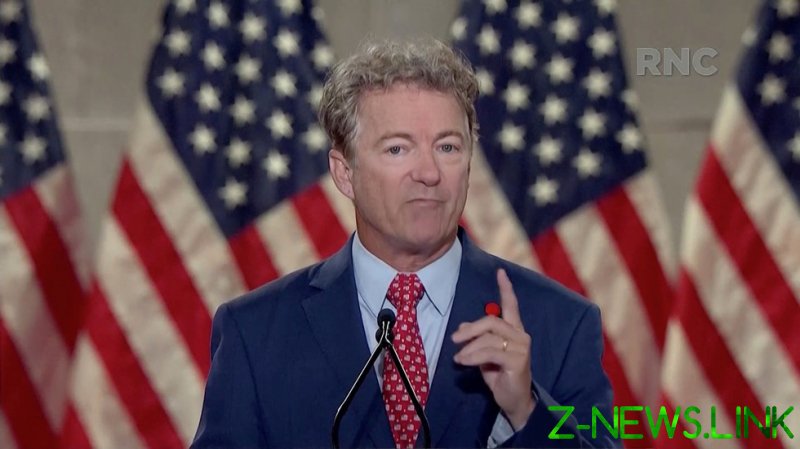 Paul, who frequently crossed swords with Donald Trump when both were vying to become a Republican presidential candidate in the 2016 race, admitted during his speech that he did not always agree with the president, but said that Trump’s desire to put an end to “endless wars” far outweighs their differences.

“I’m supporting President Trump because he believes as I do, that a strong America cannot fight endless wars, we must not leave our blood and treasure in the Middle East quagmire,” Paul said.

Calling Trump “the first president in a generation to seek to end war rather than to start one,” Paul went on to attack what he called a “disastrous record of Joe Biden,” pointing that as a senator, Biden, among other things, voted to give then President George W. Bush authority to use force in Iraq.

Fox News, which snubbed most of the first night of the convention, opting for its usual programming instead, replaced parts of Paul’s speech with host Tucker Carlson interviewing Donald Trump Jr. live on air.

MSNBC also interspersed Paul’s speech with insights from host Rachel Maddow, who attempted to fact-check Paul on his claim that Trump was “bringing our heroes home.”

Maddow claimed that the total number of personnel deployed overseas had reportedly even grown under Trump’s watch, although Paul appeared to refer primarily to deployments into hot spots in the conflict-ridden Middle East.

After he became a Democratic presidential candidate, Biden called his Iraq vote in October 2002 a “mistake,” arguing that by siding with the hawks he wanted not to launch the war, but rather “to prevent the war from happening.” Biden insists that, by untying Bush’s hands, he believed the administration would have been able to put more pressure on the UN Security Council and late Iraqi leader Saddam Hussein.

Despite being a strong advocate for the US bombing campaign in Yugoslavia in 1999, Biden also extended his condolences to the victims of the raids while visiting Belgrad, Serbia, in August 2016.