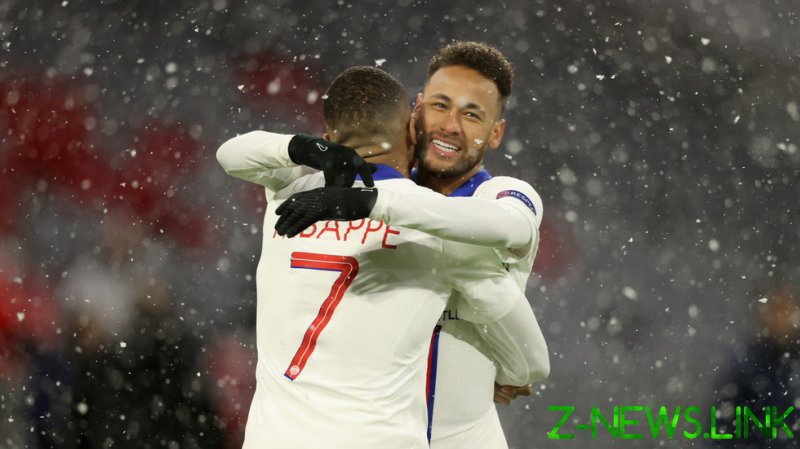 Notching a pair of goals and assists each, the Frenchman and the Brazilian stole the headlines in a repeat of last year’s final.

That was famously won 1-0 by Bayern, but the Parisians exacted revenge in a snowy Allianz Arena on Wednesday night by bagging three vital away strikes to take into next week’s decider.

Popping up in under three minutes, Mbappe laid into the Bundesliga giants when brilliantly set free by a sideways through-ball from Neymar on the edge of the box.

Then, approaching the half hour mark, ‘Ney’ produced another moment of genius with his weaker foot.

As a PSG move broke down and Bayern pushed out of their area, most players would have took the safe route and passed back to ‘keeper Keylor Navas to regroup.

Spotting his compatriot Marquinhos in a goalscoring position, however, the world’s most expensive footballer swung a pinpoint pass to the center back’s feet for him to slot past Manuel Neuer and make it 2-0.

“Basti you’re a Bayern legend.. f*cking act like one,” demanded another angry punter.

Meanwhile, Neymar had sneaked into the record books with his feat.

Since debuting in the competition for Barcelona in 2013/2014, following a move from boyhood club Santos, he now has 25 assists to his name which is the most of any other player in this time.

Replies from Eric Maxim Choupo-Moting and Thomas Muller either side of the half-time whistle leveled it 2-2, and led to fans signing the praises of one of the best games they had seen in the UCL in years.

But Mbappe fancied joining Neymar by becoming PSG’s all-time top scorer in the knockout phases and surpassing Thierry Henry’s tally of 12 at the tender age of 22.

Ironically with 22 minutes to spare, he shimmied on the edge of the 18-yarder and ripped off a shot into the bottom corner “so disguised it should have worn a mask”, as one punter described it.

Considering his hat trick in the Camp Nou, Mbappe also become the first man in history to net five away goals across the last 16 and quarterfinals.

And for all the criticism of the French top flight being a ‘Farmer’s League’, Mauricio Pochettino’s men can turn up the heat on big continental nights like this whenever they are on form.

Top priority in the summer needs to be tying Neymar and Mbappe to new contracts, and prevent them strolling to La Liga’s two biggest outfits on frees in 2022.

Working in tandem to this extent, their hand at the negotiating table could be strengthened by having finally delivered the elusive big-eared trophy to the French capital.