‘Don’t talk about my mom’: Canelo shows incredible reflexes as he trades blows with Plant at explosive press conference (VIDEO) 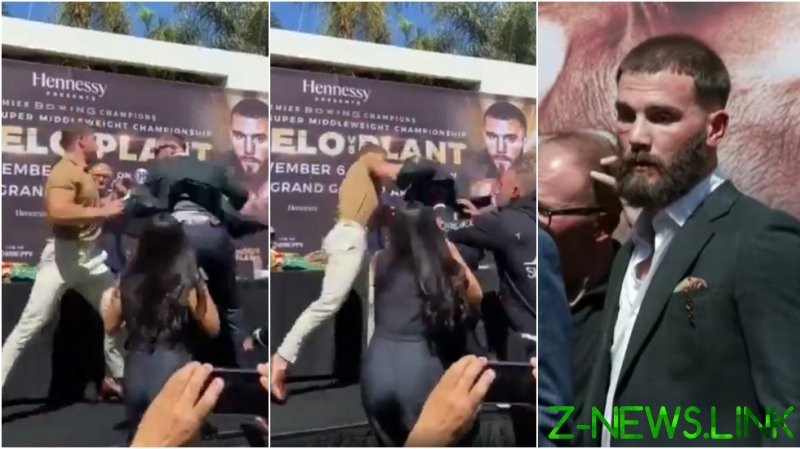 Facing off for a staredown at the Beverly Hilton hotel, Mexican icon Canelo snapped after an X-rated exchange of words with Plant, shoving the American forcefully with two hands.

Plant came back swinging with a left hand, which Canelo appeared to slip artfully before countering with a shot of his own.

The pair were eventually separated by their teams and security, although Plant was left with a cut below his right eye which he later said had come from his sunglasses being jammed into his face.

“You can say whatever you want to me, but not about my mother,” Alvarez said afterwards, adding the same message in a tweet which showed footage of the exchange.

Plant was seen dabbing at blood from his cheek and was patched up with a band aid.

The 29-year-old American – who owns the IBF super middleweight title – continued to launch repeated barbs at Canelo when the pair sat down for a feisty press conference, repeatedly accusing the Mexican and trainer Eddy Reynoso of being “cheaters.”

Canelo, 31, was suspended for six months in 2018 after banned substance clenbuterol was detected in a drug test, although the Mexican star insisted it had come from tainted meat.

“That just gives me more confidence. I’ve dedicated a lot to this sport, and it will be my life’s work coming together in that one moment when I beat him. It would etch my name in the history books, and that’s what I’m here to do.”

The American also took to social media to dispute claims that he had come off second best in the scuffle, sharing an image which showed he had clipped Canelo slightly with his left hand.

He also denied that he had insulted Canelo’s mother, pointing to the death of his own mother in 2019 as the result of an officer-involved shooting in Cheatham County, Tennessee.

“You’ll never hear me talk about someone’s mother, kids or wife. When men go off to war they leave the women and children at home,” Plant wrote.

Most observers, though, were impressed with Canelo’s typically swift reflexes as he slipped Plant’s effort to catch him with his left hand.

Canelo and Plant are preparing to meet in their title unification bout at the MGM Grand Garden Arena in Las Vegas on November 6.

WBC, WBA and WBO super middleweight king Canelo is widely considered as the world’s pound-for-pound number one. His only career loss in 59 fights remains a majority decision defeat to Floyd Mayweather in 2013.

Plant is undefeated in 21 fights, winning 12 by knockout.