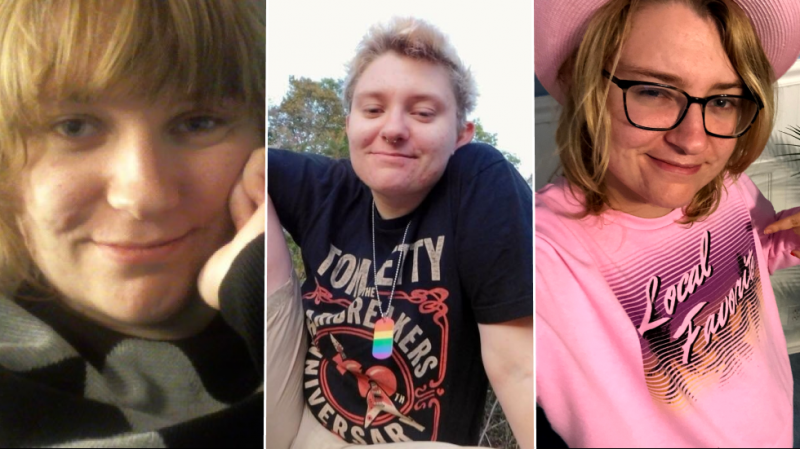 In recent times, liberals’ desire to embrace the burgeoning trans movement has meant that if someone says they’re trans, people have been encouraged to support them unconditionally.

On the surface, this may appear to be ‘doing the right thing’. But according to one woman who has detransitioned, there is a danger to this – as transition conceals a hidden mental health crisis. “Transition is a big Band Aid that ironically causes more damage,” says Laura Becker, who previously identified as a trans man. “If you lie to someone and put a Band Aid [on] to cover their problems, you can pretend they’re not there and ignore them. It’s OK for a little while, but then it catches back up to you.

You take that Band Aid off, and you have this festering wound that’s even worse than if you started treating the wound at source, even if it was really painful.”

That may appear harsh, but Becker believes honesty is the best policy, rather than being embarrassed or worried about upsetting someone. She, more than anyone, knows the cost of the liberal approach, after starting to take testosterone aged 18 and having a double mastectomy two years later. By 22, she was detrans – but she will never get her breasts back.

In her opinion, the vast majority of young people considering changing their gender are being pulled into something unnecessarily. She continues, “The rapid onset of gender dysphoria among young people and these skyrocketing rates of young girls identifying as trans… I don’t think they need it. It’s a misguided attempt to explore their identity.

Since when are 18-year-old college kids from sheltered, liberal homes suddenly the scientific, medical and philosophical authority on the human condition and biology?”

The issue, she believes, is caused by therapists, doctors and surgeons who don’t understand their patients. Becker, now 24, found it shockingly simple to begin hormone therapy, even though her mental struggles were clear.

She explains, “I’ve seen multiple psychiatrists and doctors. Back in the day, I was doing substance abuse and all sorts of things, but I talked well so they thought I knew what I was talking about.

In reality, I was incompetent – I wasn’t getting out of bed or taking a shower for weeks on end. In general, it’s not thorough enough, people are supposed to accept you at face value: ‘If you’re trans, you’re trans.’

It took me an hour to get a free prescription of testosterone, even though I said: ‘I’m suicidal.’ The testosterone made me worse as if you’re having mood swings and are irrational, and you add a drug like testosterone, that’s not going to help. It made things a lot worse for me emotionally.”

It was even easier for Becker to obtain a recommendation for surgery from her psychiatrist. To hear her explain how simple it was is truly shocking, considering this was an elective amputation of a body part.

Becker says, “I wear my heart on my sleeve, my mental health crisis wasn’t hidden at all. I just told her I’m trans, I’m having gender dysphoria and she’s like ‘alright, I’ll look it up.’

The next time I saw her, she said I met all the criteria and gave me the ‘gender dysphoria’ label, and wrote a surgery letter.”

On reflection, Becker is appalled at how her psychiatrist behaved. “She had no business diagnosing me like that,” she claims.

On the day of her surgery, another clear warning sign was ignored. Becker continues, “I told the surgeon ‘I’m feeling suicidal’ and he was like: ‘Is it related to being trans?’ I said it wasn’t, but even so, I feel like it’s extremely unethical on the part of all these professionals to allow someone who’s suicidal to make a long-term decision.

Now I’m like: ‘How could I make such an irrational decision?’ I was led down the wrong path and neglected in getting treatment.”

One might imagine that people who undergo transition will be supported mentally before, during and after the process. But that is not the case, and Becker says that her experience is sadly far too common. She points to the often one-sided research into transitioning as proof of the lack of insight.

“There is a huge loss to follow-up of people who never contact them again – many of them have committed suicide or just don’t get in touch again,” she says.

“A lot of these small studies, which they are basing this supposed evidence that transition surgery is good on…these studies are terrible, empirically really poor, the data is very small and there’s huge loss to follow-up. Someone like me would be considered a loss to follow-up; my surgeon never saw me again.”

Even more horrifying is that since detransitioning, Becker has seen the general practitioner who started her on testosterone – and the issue was completely ignored.

She reveals, “It was basically nonchalant, surprisingly anti-climactic. I didn’t see her for a year, I go in and I update them. They asked, ‘Are you still on testosterone?’ I said: ‘No, I detransitioned,’ so they checked that off. They didn’t ask questions about it, they don’t follow up on it…nothing.”

While aftercare appears to be hugely lacking, it’s not the key issue. Becker believes that people are presenting with signs of mental health issues and the symptoms are missed.

She says, “There are a lot of reasons why people identify as trans but it almost always comes back to some kind of identity crisis or mental health issue.

If you look at the rates of people who identify as trans, there is a higher proportionality of those on the autism spectrum, ADHD, PTSD, a history of childhood abuse and trauma, depression, anxiety, bipolar… So there are a lot of different issues that come up for mental health.

The reason I identified…and for a lot of people…they are trying to escape from reality of their pain so they want to turn themselves into somebody else.”

As Becker sees it, other issues are causing unhappiness, but the current high profile of trans ideology is leading confused and unstable individuals to believe they need to transition.

She said, “I was like: ‘Well if I was accepted as a man, a lot of my problems would be solved.’ I might be taken more seriously, people might get my sense of humor more, I might be more credible. I didn’t feel listened to, I didn’t feel seen. That’s what a lot of these young people feel.”

What Becker’s own experience – and that of the detrans people she knows – reveals is that too often situations are made worse as new problems are created.

“It’s being construed and confined into this box of gender identity and it’s all manifesting around the body and how there is something wrong with you physically…a lot of people want to physically escape from reality,” she says.

“I’ve learned from going through this hellish nadir of pain, and I ended up with being able to cope with my feelings by grounding myself in my sex instead of shying away from being a biological woman. I started to connect with other women who found pride, beauty and joy in their female experience. I found some positive female role models. I realized I’m not as weird as I thought and the condition I have is the human condition.”

One key part of the debate that needs addressing is whether medical professionals assisting people to transition are unwittingly making errors. Becker believes they are, but she doesn’t feel they should be excused.

“It’s ignorance,” she explains. “I think it’s well-intentioned misguided empathy and sympathy, and even pity. They feel bad for you, they don’t really understand and there isn’t that much research done or at least they haven’t bothered to look into it…they have a very, very surface level understanding.”

Reflecting on her own “hellish” journey of being encouraged to actively think of herself as a man, only to return to being a woman and realize it was all unnecessary, she concludes, “It was medical neglect the whole time, but it’s even more neglect afterwards unfortunately. It’s trippy to not have a certain body part anymore that you once had, it’s very bizarre.

There were so many people who failed me along the road, so I can’t blame the surgeon as he’s a cosmetic surgeon – that’s his job. In his view, he is making a huge profit and ‘helping’ trans men. It’s not all his fault or my GP for recommending me. I was failed at many, many steps along the way.

No one gave a f**k to be frank. I was a legal adult getting this elected surgery, I fell through the cracks and, let’s be real, they were huge cracks.”

Very few detrans people are given a platform to speak, as they are often portrayed as attacking the vulnerable trans community.

But Becker has some advice that she hopes will add some perspective to the wider discussion.

“We’ve known for hundreds of years that young people go through identity crises, they are very defiant and politically charged. Why are we suddenly allowing them to make all our legal and cultural decisions on this matter?” she asks.