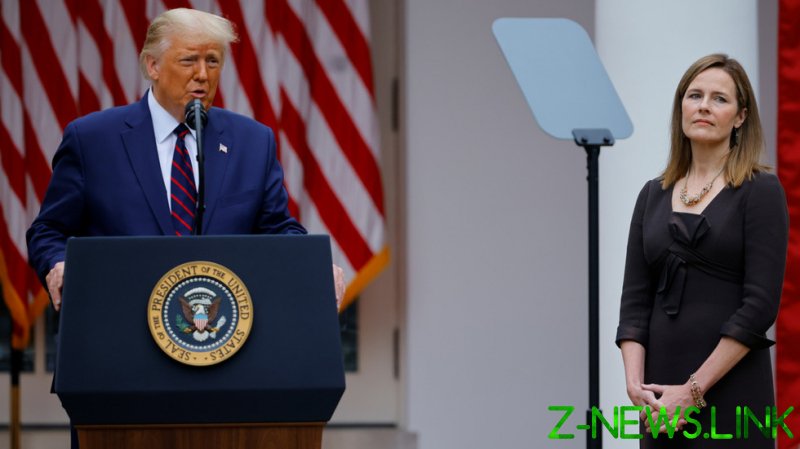 Trump vowed last week that he would nominate a woman for the vacancy within a week, saying he had an “obligation” to act without delay.

The president made the announcement with Barrett at his side in a Rose Garden ceremony on Saturday. He praised her legal background, saying she is “eminently qualified for the job.” Barrett will decide cases “based on the text of the constitution, as written,” he said.

Taking to the podium after Trump, Barrett said she was “truly humbled” by the prospect of serving on the Supreme Court. She also paid tribute to the late Justice Ginsburg.

Barrett, 48, currently serves on the 7th US Circuit Court of Appeals in Chicago. If confirmed, she’ll be the only Supreme Court justice who didn’t attend Harvard or Yale University — and the first who didn’t get an Ivy League law degree since the late John Paul Stevens was nominated in 1975. Barrett, a New Orleans native, attended Notre Dame University, where she graduated first in her class in 1997.

In his Saturday comments, Trump said Barrett’s qualifications were “beyond reproach,” noting that she was confirmed to the appellate court bench in a bipartisan vote in 2017. “This should be a straightforward and prompt confirmation,” he said, prompting some laughs from the audience.

Trump’s decision to move swiftly to fill Ginsburg’s seat has enraged Democrats, particularly given that the late judge’s granddaughter Clara Spera revealed that it had been her “most fervent wish” that she would not be replaced “until a new president is installed.”

Barrett’s nomination will worry Democrats who fear she is too conservative. She signed onto a 2012 letter criticizing an Obamacare requirement that forced all employer-provided health insurance plans to cover contraception. She authored the lone dissenting opinion when the 7th US Circuit Court last year upheld a law prohibiting non-violent felons from owning guns.

Barrett has never ruled directly on an abortion case, but in a 2013 Texas Law Review article referring to seven “super-precedents” — cases that the court should never consider overturning — she excluded Roe vs. Wade, the landmark 1973 ruling that protected a pregnant woman’s right to choose. Among the cases she included was Brown vs. Board of Education, the 1954 precedent that found segregation of children in public schools was unconstitutional.

Barrett’s Catholic faith was questioned by Democrat Senators when Barrett was appointed by Trump to the 7th US Circuit Court in 2017. Senator Dianne Feinstein questioned would have unbiased legal opinions, given that “the dogma lives loudly within you.” Senator Dick Durbin asked Barrett whether she considers herself an “orthodox Catholic.”

Trump urged Senate Democrats to give Barrett the “respectful and dignified hearing that she deserves — and frankly, that our country deserves.” He told US senators in attendance at Saturday’s ceremony that the confirmation process “might be easier than you expect,” but Barrett expects a tough test.

“I have no illusions that the road ahead of me will be easy, either for the short term or long haul,” Barrett said. “I never imagined that I would find myself in this position, but now that I am, I assure you that I will meet the challenge with humility and courage.”