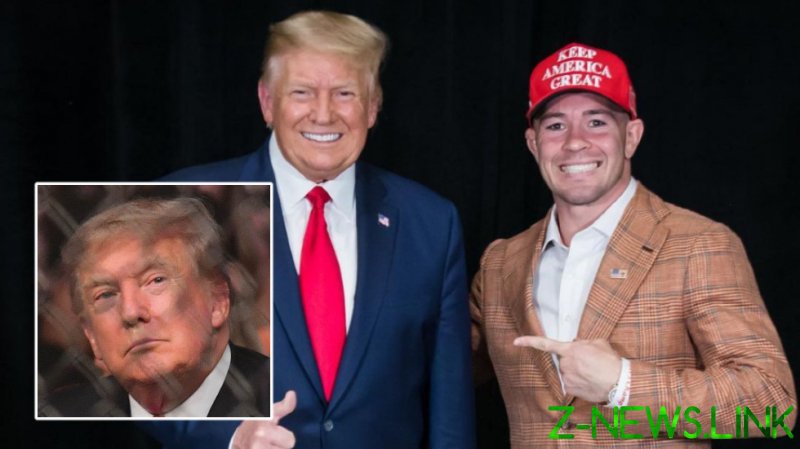 Controversial Covington has made much of his relationship with Trump, picturing himself beside the billionaire in the White House during his presidency and sharing phone calls with him before and after fights.

Ahead of his attempt to avenge his 2019 defeat to bitter rival Usman, Covington has suggested that Donald Trump Jr, Eric Trump and Lara Trump will be at Madison Square Garden in New York to watch the action.

The welterweight loudmouth is less sure about MMA fan Trump’s attendance at his fight with an adversary who has also been publicly praised by the 75-year-old at his rallies.

There has been talk of Trump campaigning for a return to the highest seat in the land ever since he lost the US election to Joe Biden and the Democratic Party last November.

As well as bragging rights in his division, Covington will see victory as a sign that Trump is destined to sweep back into power.

“I’m going to take that UFC undisputed title back,” he predicted. “Then I know that Donald Trump is going to take back the White House.”

Covington was involved in a fractious previous promotional campaign with Usman that even drew accusations of racism over dubious comments he made about the Nigerian-American’s “tribe”.

The 33-year-old may not be overjoyed to be reminded that Trump singled out Usman for praise during the same election trail in which he gladly posed with Covington.

“Does anybody like UFC?” Trump asked a crowd at the rally Usman was at, when he namechecked the figher’s manager, Ali Abdelaziz, who also represents former champion Khabib Nurmagomedov.

“I don’t want to mess with him. I may weigh a couple of pounds more. Do you think I could take you in a fight, champ? I don’t think so. He goes, ‘No.’ I think you’re right, champ.”

In a typically bizarre flow of sentiments, Trump then said that he would be watching Usman fight and applauded him for looking good in a suit.

The ex-leader watched Conor McGregor lose to Dustin Poirier at UFC 264 in Las Vegas in July, and has also earned support from the likes of Jorge Masvidal, who spoke of how flattered he was to be publicly recognized by Trump and sat for pictures on a campaign bus with Trump Jr.

The location Trump apparently spoke to Covington from may not be entirely surprising to anyone aware of his sporting endeavors. “He was at the golf course, giving me his well wishes,” revealed the fighter.