Home / WORLD / Dominic Raab was ON HOLIDAY as Taliban encircled Afghan capital, reports say, while UK Ambassador said to be remaining in Kabul

Dominic Raab was ON HOLIDAY as Taliban encircled Afghan capital, reports say, while UK Ambassador said to be remaining in Kabul 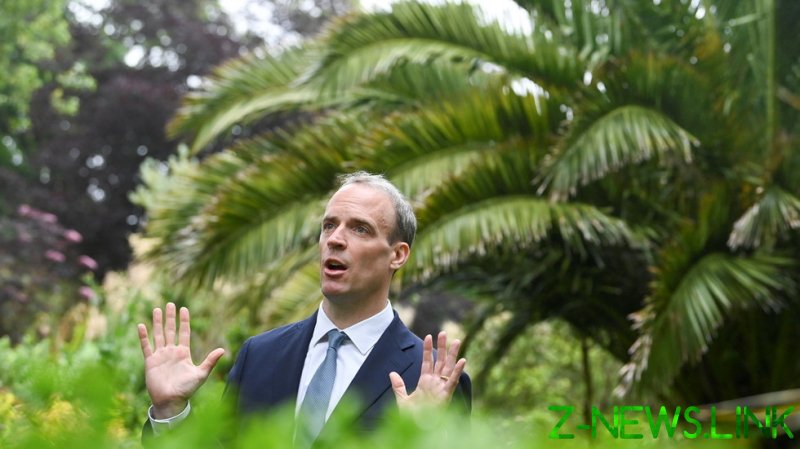 Raab flew back to Britain on Sunday, days after it became clear that the situation on the ground in Afghanistan was rapidly evolving and the fall of Kabul was only a matter of time. Taliban militants entered the country’s capital on Sunday, while Afghan President Ashraf Ghani fled the country.

It was not immediately clear where the top UK diplomat was vacationing while the pro-Western Afghan government effectively fell apart. The Foreign Office refused to disclose the minister’s holiday destination to media.

At the same time, the diplomatic service said that the British envoy in Afghanistan was at his working place and the mission continues to operate.

“We have reduced our diplomatic presence in response to the situation on the ground, but our Ambassador remains in Kabul and UK Government staff continue to work to provide assistance to British nationals and to our Afghan staff,” a Foreign Office spokesperson said.

The mission was said to be staying put at its Kabul compound, even as the US embassy staff had already been airlifted to the city’s airport. The French foreign ministry said that its mission will be relocated closer to the airport as well.

The Taliban’s flash offensive has apparently spoiled vacations not just for Raab; the UK Prime Minister Boris Johnson has scrambled an urgent COBRA meeting to assess the Afghanistan situation. The Civil Contingencies Committee is usually convened over matters of national security or major disruptions, with ministers and senior officials from various government bodies in attendance.

Johnson also asked UK lawmakers to cut short their vacations, recalling Parliament from its summer recess over the Afghan crisis.

Speaking later on Sunday, Johnson said that it was very clear that a “new government” will emerge in Kabul shortly. At the same time, he urged other countries to abstain from recognising the Taliban as the new rulers of Afghanistan.

“We don’t want anybody bilaterally recognising the Taliban,” Johnson stated. “We want a united position amongst all the like-minded, as far as we can get one.”

The PM also said the UK government is working to get British nationals out of Afghanistan as soon as possible. London has means to do so over the next few days, Johnson said.