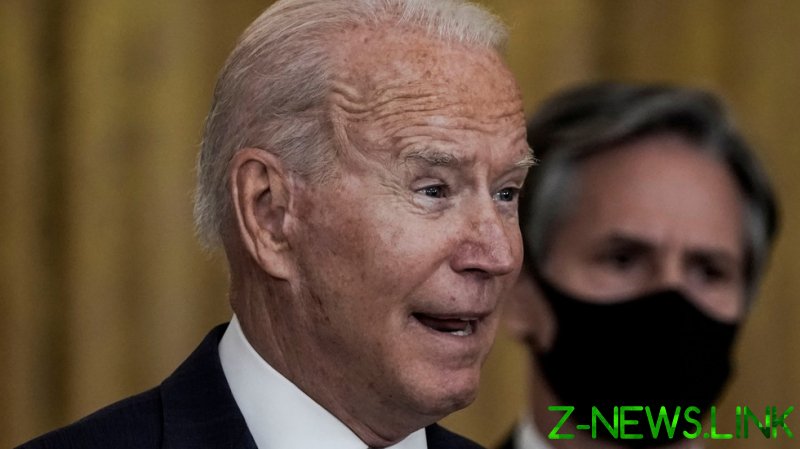 According to Biden’s public statements, the US withdrawal and evacuation from Afghanistan is going about as well as can be expected. The president has claimed that Al-Qaeda – the terrorist group the US set out to destroy 20 years ago – is no threat in Afghanistan, and the US’ allies have praised Washington’s withdrawal.

Those statements aren’t true. UN reports claim Al-Qaeda is present in nearly half of Afghanistan’s 34 provinces, and America’s allies have condemned the US’ chaotic pullout. Armin Laschet, the German politician likely to succeed Chancellor Angela Merkel, described the withdrawal as “the biggest debacle that NATO has seen since its foundation.”

Given the disconnect between Biden’s statements and reality, Fox News host Chris Wallace asked Secretary of State Tony Blinken on Sunday “does the president not know what’s going on?”

Blinken dodged the question, saying “this is an incredibly emotional time for many of us.”

He did not return to the question, instead launching into apparently prepared talking points about the US’ relationship with its allies. When pressed again by Wallace, Blinken gave the same answer about the “powerfully emotional time” the Biden administration and its foreign friends are experiencing.

His evasiveness was noted by viewers, with one commenter suggesting that Blinken “take a break from TV appearances until the administration can get its story straight.”

Conflicting stories and contradictory statements have been a motif of the Biden administration since Kabul fell to the Taliban a week ago. After months of assurances from Biden, his generals, and his intelligence agencies that the Afghan capital would hold out against the militants for several weeks or months, the administration has been grilled on how it could have gotten things so wrong, and on how it failed to evacuate Americans in an orderly fashion. Nobody has yet to give a compelling answer.

Making the rounds on the Sunday talk shows, Blinken admitted to CBS News that the US is counting on the Taliban’s good graces to get thousands of Americans to Kabul airport.

Not only did Blinken admit that the US was essentially asking the Taliban permission to evacuate the city, he also referred to a conversation he had several days ago with “President Karzai” – a former leader who hasn’t ruled Afghanistan since 2014.

Secretary of Defense Lloyd Austin also appeared on the Sunday shows, and he, too, offered little assurance regarding Biden’s knowledge of the situation in Kabul. Austin refused to tell ABC News’ Martha Raddatz what advice he had given Biden on how to execute the withdrawal, merely that Biden “listened to our input.” Echoing Blinken, Austin added that he was counting on the Taliban to allow Americans through their checkpoints to the airport, noting that some Americans had already had “tough encounters” with the Islamist militants.

As the US evacuation continues, American troops and Taliban militants are both maintaining a security perimeter around Kabul Airport. After a week of chaos, with Afghans storming the airport and clinging to American planes in a desperate bid to escape Taliban rule, and with sporadic gun battles breaking out in the area, a NATO official told Reuters on Sunday that at least 20 people died in and around the airport over the last week.

Joe Biden has spent much of this time at home in Delaware or at the presidential retreat of Camp David. He is due to hold a press conference later on Sunday afternoon.