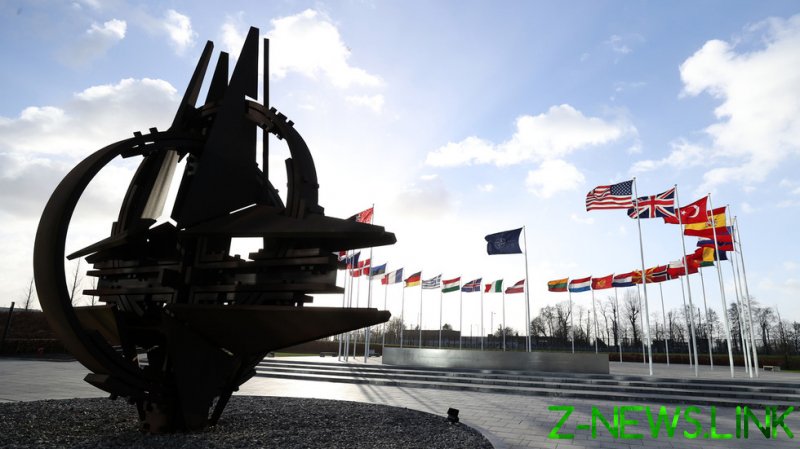 A newly discovered document from March 1991 shows US, UK, French, and German officials discussing a pledge made to Russia that NATO will not expand to Poland and beyond. Its publication by the German magazine Der Spiegel on Friday proves Moscow right and NATO wrong on the matter.

The minutes of a March 6, 1991 meeting in Bonn between political directors of the foreign ministries of the US, UK, France, and Germany contain multiple references to “2+4” talks on German unification in which the West made it “clear” to the Soviet Union that NATO will not expand past the eastern borders of Germany.

“We made it clear to the Soviet Union – in the 2+4 talks, as well as in other negotiations – that we do not intend to benefit from the withdrawal of Soviet troops from Eastern Europe,” the document quotes US Assistant Secretary of State for Europe and Canada Raymond Seitz.

“NATO should not expand to the east, either officially or unofficially,” Seitz added.

A British representative also mentions the existence of a “general agreement” that membership of NATO for eastern European countries is “unacceptable.”

“We had made it clear during the 2+4 negotiations that we would not extend NATO beyond the Elbe,” said West German diplomat Juergen Hrobog. “We could not therefore offer Poland and others membership in NATO.” 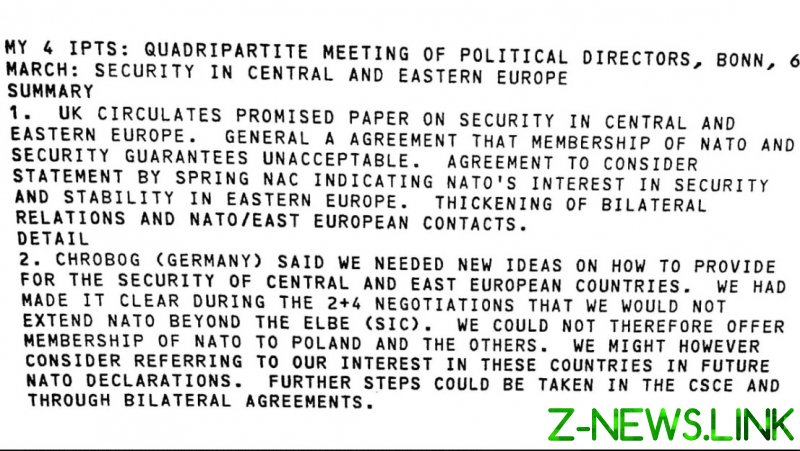 Screenshot of the minutes of a March 6, 1991 meeting of US, UK, French and German diplomats discussing NATO and Eastern Europe ©  screenshot via Kommersant

The minutes later clarified he was referring to the Oder River, the boundary between East Germany and Poland. Hrobog further noted that West German Chancellor Helmut Kohl and Foreign Minister Hans-Dietrich Genscher had agreed with this position as well.

The document was found in the UK National Archives by Joshua Shifrinson, a political science professor at Boston University in the US. It had been marked “Secret” but was declassified at some point.

Shifrinson tweeted on Friday he was “honored” to work with Der Spiegel on the document showing that “Western diplomats believed they had indeed made a NATO non-enlargement pledge.”

“Senior policymakers deny a non-expansion pledge was offered. This new document shows otherwise,” Shifrinson said in a follow-up tweet, noting that “beyond” the Elbe or Oder by any standard includes Eastern European countries to which NATO started expanding just eight years later.

During a major press conference in December 2021, Russian President Vladimir Putin said the West had promised the Soviet Union NATO would not expand “a single inch” to the east, but “brazenly deceived” and “cheated” Moscow to do just that.

NATO admitted Poland, Hungary, and Czechia in March 1999, just before launching an air war against Yugoslavia without the permission of the UN Security Council. This put NATO directly on the Russian border – the enclave of Kaliningrad – for the first time ever. The next round of expansion in 2004 included the former Soviet republics of Estonia, Latvia, and Lithuania, placing NATO’s eastern frontier just 135 kilometers (84 miles) from St. Petersburg.

In a series of security proposals made public in December, Russia demanded NATO publicly renounce expansion to the former Soviet republics of Ukraine and Georgia and withdraw US forces to the 1997 boundaries of the alliance, among other things. The US and NATO have rejected this, arguing the alliance’s “open door” membership policy is a fundamental principle for them.