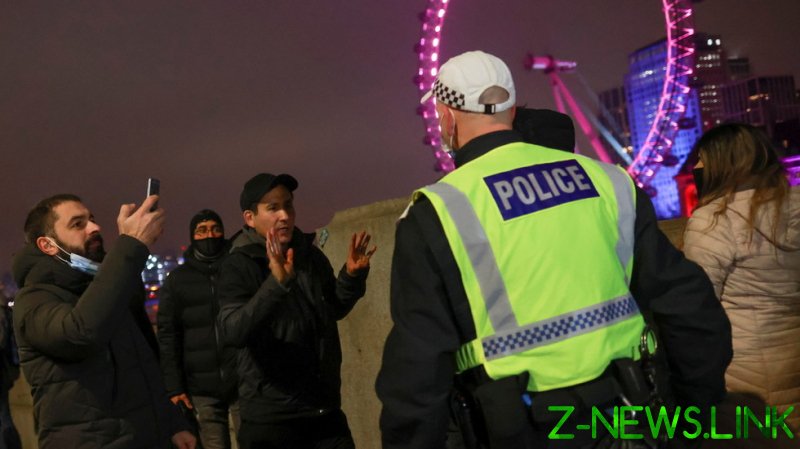 Matthew Lee, a junior doctor at London’s St. Thomas’ Hospital, said he was confronted by “hundreds of maskless, drunk people in huge groups” in the early hours of Friday morning, some calling the coronavirus a “hoax” – “literally outside the building where hundreds are sick and dying.”

The gathering was part of a larger anti-lockdown protest organized by Piers Corbyn, the elder brother of former Labour leader Jeremy Corbyn, who led the crowd in chants, at one point even engaging in a fire-breathing show for spectators. Ahead of the demonstration, Corbyn revealed that he would run in London’s mayoral race, and was later seen in footage confronting a police line stationed near the hospital. He was issued a £200 fine for breaching the region’s coronavirus restrictions, according to the Daily Mail.

Lee’s post was met with an avalanche of support, as many voiced outrage over the “selfish” crowd, some demanding draconian penalties for violations of the UK’s coronavirus restrictions, and even the denial of healthcare for those questioning the severity of the pandemic.

“I really don’t understand why they were not moved on or arrested[,] they’re in breach of Covid-19 regulations causing an obstruction,” one commenter said, asking “why were they allowed to gather/remain?”

Despite Lee’s heartfelt appeal, however, some netizens remained skeptical in his message, questioning the danger of the virus, as well as government policies aiming to halt its spread.

“Not a hoax, but no one is telling the truth about it. That’s why people are behaving this way,” one user said. “Why is no one allowed to ask the questions that are pertinent to this pandemic.  Why are the figures massaged or impossible to get hold of and why is there no context of risks involved?”

The doctor’s viral tweet made the rounds hours before UK health officials reported another 53,285 new coronavirus infections and 613 deaths on Friday, added to nearly 56,000 cases tallied the day prior. The country saw a precipitous rise in new cases over December, with daily infections climbing by the tens of thousands as total fatalities topped 70,000. Meanwhile, a new and more infectious strain of the virus has also spread through the UK and beyond since it was first detected in September, triggering panic among world health bodies and bans on British travelers in dozens of countries, as well as tightened restrictions in some regions of the UK.