Home / Video news / Dobkin and Hire quarreling because of the laws on the Donbas. Video

Dobkin and Hire quarreling because of the laws on the Donbas. Video 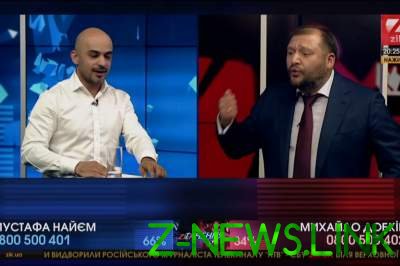 MPs staged verbal sparring during a discussion of new laws on the Donbas.

During one of the broadcasts on the scandal between the people’s deputies of Ukraine from the Opposition bloc Mikhail Dobkin and member of the parliamentary faction of the Bloc of Petro Poroshenko Mustafa Nayem. There was an argument over content and essentially adopted October 6, 2017 in Parliament new laws on the Donbas.

Dobkin called the bill on the reintegration of Donbass “stuff, which was proposed by Nye and his colleagues in BPP”.

What Dobkin said to Mustafa: “You are in his signature block”. And added “Fingers point at me not to.”

After that, members began to exchange remarks. Dobkin accused the colleague that the money Soros has brought grief to the country.

“I have the courage to say that you’re a liar, you’re a criminal, that money Soros brought war and grief to my country, – said the people’s Deputy from “Oppositional block”. I know perfectly well that Mustafa Nayem with their backpacks, thermoses, good mood, fooled millions of my compatriots. I think like you, have ever middle of the night to get up to see the moon, take the rope, and soap to go raise people in a good mood in the morning,” he said.

Nye responded by rebuking Dobkin in incivility, as he addresses him.

“It’s called bychit. It is not necessary to do this. And I hate to put you on the spot”, – said the MP from the PPO.