Home / WORLD / ‘Do you see an insurrection?’: Justice for J6 rally goes off without incident despite warnings of violence, endless media coverage

‘Do you see an insurrection?’: Justice for J6 rally goes off without incident despite warnings of violence, endless media coverage 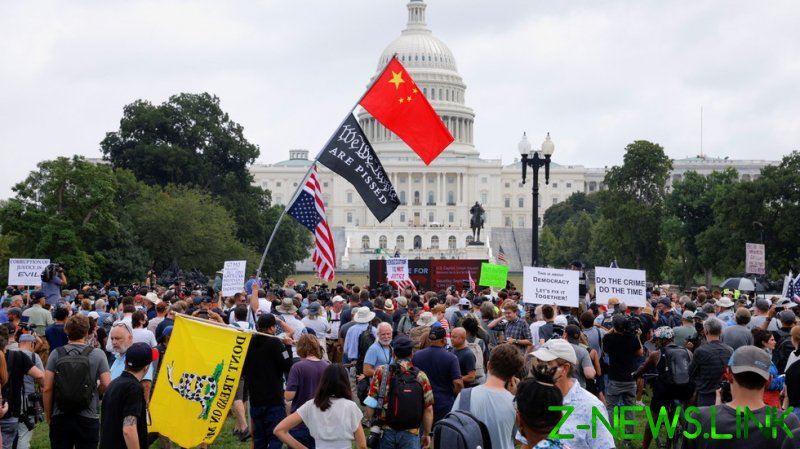 In anticipation of Saturday’s rally, organized by Look Ahead America, Capitol Police had the support of multiple other law enforcement agencies, as well as 100 National Guard soldiers on standby in case the right-wing event became violent.

The Capitol Police chief warned multiple times that violence would not be tolerated, and the protest gained massive media attention and was connected heavily by pundits to the January 6 riot. Capitol Police even warned of threats against lawmakers ahead of the demonstration.

The actual event, however, turned out to be mostly what organizers were promising: a peaceful protest. While hundreds arrived for the demonstration in front of the US Capitol, they were largely outnumbered by law enforcement agents and press – some of whom reportedly came wearing bulletproof vests, only to remove these later.

When speaking, organizer Matt Braynard made a point to condemn any and all violence that occurred on January 6 and kept his focus on non-violent offenders who’re nevertheless being charged or kept behind bars. These people, Braynard argued, are “political prisoners” and should be released with a fine as many other protesters were during the height of the Black Lives Matter and Antifa protests in the summer of 2020.

“We condemn political violence in all its forms,” he said, setting ground rules for participants at the rally, telling them to respect and obey police officers, some of whom were in riot gear, as well as gathered journalists.

The rally, Braynard added, was “not about President [Donald] Trump or President [Joe] Biden,” despite what media reports have been indicating. Braynard and others called for the full release of video from January 6 and asked that non-violent rioters be given “fair” treatment.

Multiple accounts from family members of protesters currently detained in connection to their alleged actions on January 6 were read to the crowd, describing similar situations where some of the detainees have been kept in solitary confinement and denied proper access to religious and legal services.

Activist and Citizens Against Political Persecution (CAPP) founder Cara Castronuova gave the most fiery speech, taking direct aim at the media’s depiction of the rally before it even occurred, earning massive applause from the crowd.

“Take a look around. Do you see an insurrection?” she asked at one point, poking fun at those worried the day’s events would devolve into a Capitol riot situation.

Castronuova also called for “transparency” about January 6 from the federal government, blasting House Speaker Nancy’s Pelosi’s investigative commission as a politically-motivated effort. The activist made her biggest claim when she led the crowd in chanting two names: Ashli Babbitt and Roseanne Boyland. Babbitt was killed on January 6 by a Capitol Police officer after allegedly trying to break through a door in the Capitol. Boyland reportedly died of a drug overdose, but Castronuova claims there is video, which can be seen on her organization’s website, that shows Boyland being severely beaten and trampled.

Before leaving the stage, she took aim at the corporate media’s depiction of her and other Trump supporters once more.

“I’m Chinese-Italian, I’m a feminist, I voted for Barack Obama twice … do I look like a white supremacist!?” she said.

There appeared to be no major influences though, with only a few shouting matches caught on camera, most ending with Capitol Police telling someone to move on, and the person complying, even when Trump supporters were leaving the area and facing protesters with megaphones, blasting the rap song ‘F**k Donald Trump.’

Some on social media appeared disappointed in the day’s seemingly calm and quick events, openly wishing there had been more arrests to go with the hundreds that have been charged in connection with January 6.

Rep. Ted Lieu (D-California) labeled those attending the rally “traitors,” despite political violence being condemned multiple times, and Braynard and others insisting that anyone who committed violence that day belongs in prison “for a long time.”

Lieu and others also used the smaller-than-expected crowd in DC to insist Trump and his supporters have “waning influence.”

Capitol Police posted to their Twitter account about several small incidents, at one point needing to use officers to separate counterprotesters from rally-goers to avoid potential incidents.

One man was arrested for being in possession of a firearm.

Law enforcement put the total of protesters at 400-450, and Braynard said that a total of 17 rallies were being held around the country today.