Home / WORLD / Do you realize now what you have done? US gets the kind of ‘democracy’ it championed overseas

Do you realize now what you have done? US gets the kind of ‘democracy’ it championed overseas 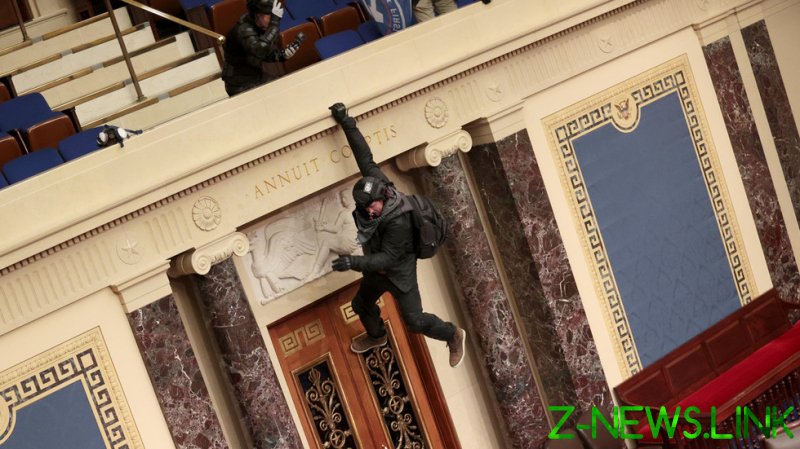 Scenes from the US Capitol on Wednesday, as protesters backing President Donald Trump disrupted the joint session of Congress meeting to certify the election of Democrat Joe Biden, looked very much like Belgrade in October 2000.

The sight was later repeated in Ukraine – twice, in 2004 and 2014 – Georgia, Moldova, Belarus, and several Central Asian former Soviet republics. On every occasion, the US backed the “people power,” because American NGOs and embassies were supporting what became known as “color revolutions.”

Same thing happened in 2011 with the “Arab Spring” that started in Tunisia and then burned its way across North Africa to the Persian Gulf. In some places it “succeeded,” overthrowing decades-old governments. In others it failed, setting off wars in Libya and Syria and blood on the streets of Bahrain. Again, the US cheered this on as democracy – except for Bahrain, which hosts a major naval base.

More recently, the US denounced as illegitimate the presidential elections in Belarus, Bolivia and Venezuela. While Minsk and Caracas managed to resist – and got sanctioned for it – the “democrats” in La Paz were successful for a while, but ended up losing the vote last year.

Way back in 2004, the Guardian wrote approvingly about how the US has created a “slick” operation of “engineering democracy through the ballot box and civil disobedience,” developing since Belgrade a “template for winning other people’s elections.”

Now the same mainstream media that slavishly followed the State Department line in denouncing elections elsewhere as “rigged” and color revolutions as spontaneous democracy are clutching their pearls when Americans who believe their election was stolen take to the streets and storm their Capitol.

Ah, but this election wasn’t stolen, they’d say – it was pure as driven snow, “most secure ever,” all the experts who told us for four years the previous one was “hacked by Russia” tell us so! And Joe Biden won the most votes in history while hardly leaving his basement. Whether you believe this official narrative about the US election or not doesn’t really matter, however. Partisan myopia simply won’t let people understand the magnitude of what is on display here: utter moral bankruptcy of the entire US political and media establishment.

Republicans and Democrats alike used “color revolutions” as a political weapon for years, preaching democracy even as their astroturfed coups snuffed out any vestiges of it that might have developed organically. Over the past year, they’ve done so at home as well, using Covid-19 lockdowns to abolish elementary constitutional rights, culminating with changing the electoral rules to better serve “our democracy,” defined as whatever gets them power.

What did they think people would do when all avenues of airing their grievances were closed off? Meekly submit – or take a page out of the same playbook the politicians and the media spent 20 years celebrating?

Don’t go “but Trump,” either. The supposed Nazi fascist dictator himself ordered National Guard and police to clear out the protesters who sided with him, and protect the establishment that did not. He’s a real Hitler, right? No matter, expect the media to paint him as such anyway.

Perhaps the US ought to take a long, hard look at its own house before it continues calling out, sanctioning, regime-changing or bombing other countries over their supposed lack of “democracy.” Maybe actually answer the question Russian President Vladimir Putin asked at the UN back in 2015, addressing the consequences of the ‘Arab Spring’: “Do you realize now what you have done?”

But we all know that’s not going to happen, don’t we?