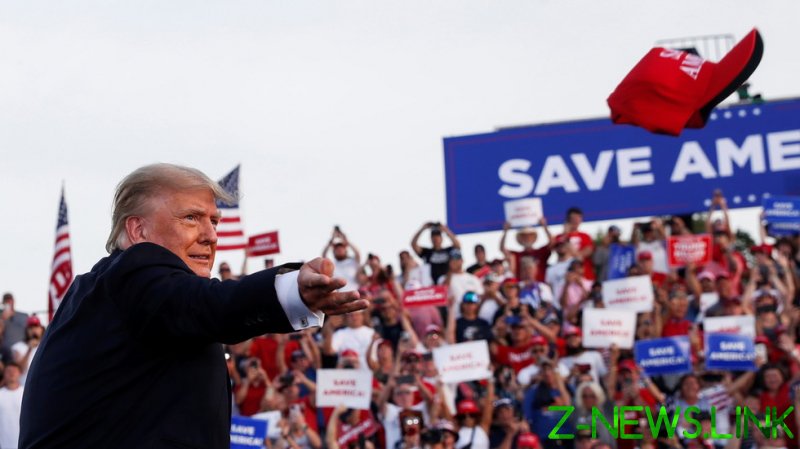 Thanking the “patriots” attending the event for the “incredible turnout,” Trump then immediately attacked the Democratic administration of his successor.

He did, however, claim credit for the withdrawal of US troops from Afghanistan, which the Biden administration plans to complete by September 11. “I started the process. All the troops are coming back. They couldn’t stop the process. 21 years is enough, don’t we think?”

Trump also taunted the ‘fake news’ media, asking the reporters present at the rally: “Do you miss me? They miss me. They look at their bad ratings and they’re saying: ‘We miss this guy.’ I said that was going to happen, I was waiting for them to endorse me, actually.”

However, several major American news networks (CNN, MSNBC, Fox) decided to not broadcast Trump’s latest speech, according to Deadline, with only C-SPAN carrying the rally as part of its ‘Road to 2024’ series. The ex-president mentioned the networks during the event as “fake news CNN” and “MSDNC,” before adding: “Fox hasn’t been so great either, have they?”

While the rally was aiming at endorsing pro-Trump Republican candidates in the upcoming 2022 midterm elections, Trump’s potential 2024 re-run for the White House has been brought up – or hinted at – several times.

“We won the election twice, and it’s possible we’ll have to win it a third time,” Trump said in his speech, doubling down on his refusal to concede the 2020 election to Joe Biden. In response, the audience started chanting: “USA!”

Representative Jim Jordan (R-Ohio), a staunch supporter of the ex-president, told Trump about his supporters’ wishes while on stage: “They want to hear from you. Mostly what they want is for you to run in 2024 and go back to the White House.”

Trump finished by once again praising his supporters and promising that the movement “will never give up” and that “the fight has only just begun.” Among other things, the ex-president promised to “break Big Tech monopolies” and “restore the right to free speech in America.”

The former president has been banned from social media platforms since his last major rally in January 6 in Washington, DC, after which he was accused of instigating the Capitol riot that followed. After months of silence on social media, on Saturday, Trump’s office confirmed that the ex-president now has an official account on Rumble, a rival video platform to YouTube, where the full recording of his speech is now available.