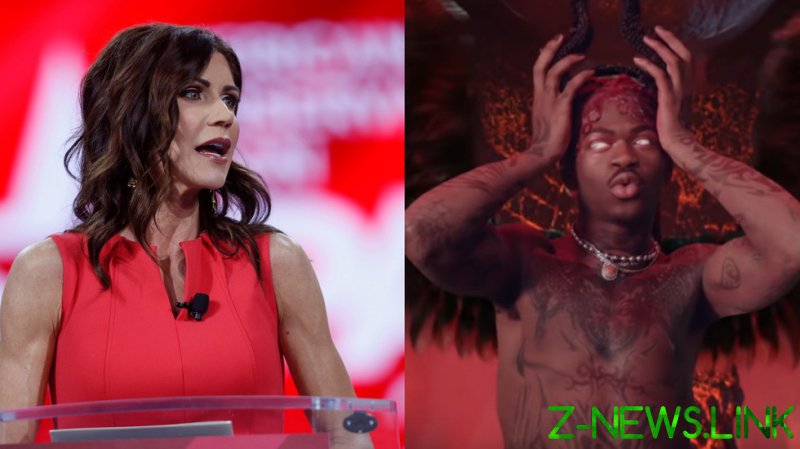 “Our kids are being told that this kind of product is, not only okay, it’s “exclusive.” But do you know what’s more exclusive? Their God-given eternal soul,” Noem tweeted on Sunday, commenting on the upcoming launch of a limited edition of “Satan shoes,” a collaboration between the company MSCHF (Mischief) and rapper Lil Nas X.

The 666 pairs of sneakers, that are expected to be sold out as soon as they are released on Monday, feature a Bible verse and “one drop of human blood” fitted inside the air bubble at the sole of the shoe. Noem was apparently not impressed with the design, as she invoked the repurposed Nike’s 1997 Air Max sneakers to call her supporters to arms to defend the nation’s charachter.

The broadside did not escape Li Nas X’s attention (probably more than eager to hype up his $1,018 a pair shoes), who lashed out at Noem for ranting about “some damn shoes” instead of minding her own gubernatorial  business. “Do you[r] job!” the rapper quipped.

Noem came back at Lil Nas X with a bible verse, tweeting: “What good will it be for someone to gain the whole world, yet forfeit their soul? -Matthew 16:26.”

The rapper opted not to address the argument, instead citing a line from his most recent song Montero. In the music video for the song the rapper gives the devil a lap dance in hell.

The ‘Satan’ sneakers and the clip have instantly gone viral, drawing both praise for clever marketing and criticism for “glamorizing hell.”

Fresh from the back-and-forth with Noem, Lil Nas X has touted a new shoe design “to even the score.” The shoe features the name of Chick-fil-A fast food chain and John 3:16 verse.

The fast-food company ran afoul of LGBTQ activists back in 2012 for donating to the Salvation Army and Christian groups. However, the Georgia-based company has since caved into the pressure, saying that it would discontinue the donations back in 2019.