Home / WORLD / Do the Dems have no respect for parents? Their strategy in Virginia suggests so, and it’s going to cost them dear 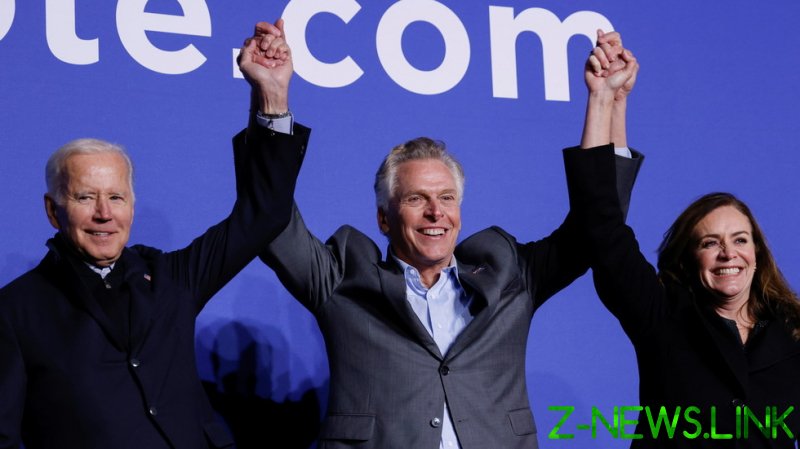 The state of Virginia has become a hotbed of political discussion over the past few weeks due to a series of controversies, most of them centered around education and the things that are going on in schools. While important in their own right, these stories have turned the state into a major battleground in the run-up to next week’s gubernatorial election, when a few months ago, many would have assumed that it was simply going to stay purple.

The uproar started in Loudoun County, where a father, Scott Smith, was characterized as a domestic terrorist by Attorney General Merrick Garland, who accused parents of exhibiting threatening behavior. Smith had been arrested after losing his temper at a school board meeting in June – but it subsequently emerged that his daughter had been sexually assaulted in a bathroom by a boy wearing a skirt, and that school officials had originally denied this has happened.

This attacker has since been convicted of the crime, and charged with a similar offense at another school. Essentially, it appears the Loudoun County School district hadn’t taken the case seriously – but the Democratic Party would want us to believe the father of the assaulted teenage girl was in the wrong.

Understandably, the saga was covered widely in the mainstream media, but in one of the dumbest political moves he’d made in his career, former president Barack Obama told Virginia voters to pay no heed to what he called “trumped-up culture wars,” dismissing parental concerns as “fake outrage.” He had been attempting to help former Virginia governor and Democratic National Committee chair Terry McAuliffe’s campaign to regain the governorship. Students at the high school to which the aforementioned assailant was transferred clearly didn’t agree, however – they conducted a walkout in protest at how the matter had been handled.

A recent story in the Daily Wire also isn’t likely to help McAuliffe’s campaign. It claimed a law firm that had once employed him as an adviser had a history of representing school boards in cases brought by teenagers who claimed to have been raped or gang-raped in school. Obviously, if proven to be true, it paints a very negative picture of McAuliffe as a candidate.

This comes on top of McAuliffe’s statements about not wanting parents to play a role in the school curriculum. “I don’t think parents should be telling schools what they should teach,” he told rival candidate Republican Glenn Youngkin.

To a parent, hearing those words from a potential governor must sound horrifying. That would give the government unilateral control over education across the entire state, and if it wanted to push the likes of critical race theory, it could do so unopposed. With policies such as this, and their unwise reactions to horrifying events, the Democrats are painting a picture of themselves as a party that is anti-parents.

Now, some might wonder why exactly they are taking such a position, but their actions make sense when you understand their agenda. The top priority of today’s Democratic Party does not seem to be the government supporting the family or the worker. Their top priority appears to be to push the philosophy of progressivism. As such, they’re going to make certain maneuvers that don’t hold what is conventionally considered traditional in very high regard.

Take their approach to the family, for instance. Progressives are far to the left, and consider government to be all-powerful – it decides what is right and wrong, and everyone else is beneath it. Obviously this is an outlook that is going to clash with a family that wants to make sure their son or daughter is learning practical things for their future, not having to read nonsense by the likes of Ibram X. Kendi. But, because ideas of oppression and such like are so important to progressives, and because of their desire to remake America in their own image, they want anyone opposed to this ethos to not be involved in the process of teaching.

And as for the sexual-assault case, as mortifying as the situation is, I’ve had a hard time being surprised by what happened. There’s a theory among many people in the political arena that there is a “progressive stack” or “pyramid of oppression.” The higher you are on the stack or pyramid, the more oppressed you are. Ergo, what you have to say has more value than what other people have to say, purely based on your skin color, gender – or supposedly lack thereof – religion, and so forth.

The current popular narrative is that transgender people are being persecuted by current attitudes towards transgenderism in society, so they must be protected because they are valuable, purely based on their own gender dysphoria. So, Obama’s comments are no shock, really. Progressives are more than happy to throw teenage girls under the bus when it suits them.

However, none of these things make sense to the sensible person. Although I’m not a father myself, I can only imagine what my father’s response would have been if one of my younger sisters had been assaulted in such a way at school. To be honest, I’ve met some fathers who would likely have shown up with a 12-gauge shotgun. On top of telling parents the government has a better idea of what’s good for their children, this is a strategy that seems designed to lose votes.

As it stands, polling suggests the gubernatorial race is in a dead heat, and if McAuliffe loses, it will show the Democrats what the future holds if they don’t correct their course. More and more parents across the country are seeing what’s going on, and if they’re parents who vote Democrat, they may be rethinking their choices at the ballot box. Whether they do so in Virginia on November 2 or in the midterms, I’m sure of one thing: the Democrats’ policies will catch up with them and they will eventually, and deservedly, lose.