Home / WORLD / DNC launches media blitz, wants Americans to ‘celebrate’ being able to see family on July 4, ‘thanks to Biden and the Democrats’

DNC launches media blitz, wants Americans to ‘celebrate’ being able to see family on July 4, ‘thanks to Biden and the Democrats’ 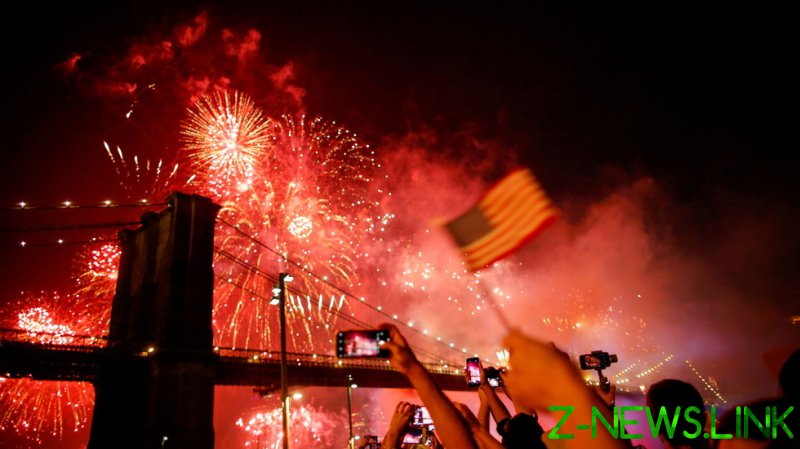 As Americans gear up to celebrate their country’s Independence Day, the Democratic National Committee (DNC) has decided now is the perfect time to remind everyone of all the good the Biden administration has done.

Part of this campaign is a cringey ad released on Tuesday declaring that “America’s coming back.”

Set to the tune of John Legend’s ‘In America,’ the ad informs us that there is more to “celebrate” this year besides just the founding of one’s country.

“This year, there’s more to celebrate. The freedom to hug a grandchild. To see a baseball game in person. To come back together again. America, leading the world out of the global pandemic with honesty and compassion,” a narrator tells us as footage of people getting vaccinated and smiling at gatherings plays.

It’s a bit disconcerting that Democrats believe that on a holiday meant to celebrate freedom and independence, Americans should somehow be grateful that they suddenly have been given the ‘right’ to see family and friends or do something as simple as seeing a ballgame in person.

Even if one agreed with the more extreme lockdown measures taken by many states, having the “freedom” to see whom you want or to attend gatherings shouldn’t have to be “celebrated.” These are basic freedoms that should require no thanks be given to anyone. The DNC appears to believe the current administration deserves all the praise, though, as the commercial flashes images of Biden and Vice President Kamala Harris hard at work and promotes the US government’s supposed “honesty and compassion” in “leading the world” during the pandemic.

In addition to the 60-second spot, the DNC is also launching an Ice Cream Truck Tour – the president’s favorite dessert is ice cream – that will go across the East Coast starting on Wednesday and end in Washington at the National Mall on the Fourth of July.

“Shots in arms, checks in banks, jobs coming back and scoops in hand,” the message on the truck will read, according to NBC News.

They’ll similarly be flying banners out of planes in states including Florida and Wisconsin with the message: “America’s back together thanks to Biden and Democrats.”

White House officials will also be traveling across the country to presumably receive their thanks in person, including the president, who will attend a rally in Traverse City, Michigan on July 3.

DNC Chairman Jaime Harrison said during a Monday virtual fundraiser – celebrate that ‘new normal!’ – that Democrats are “working overtime” to tell the world about the Biden administration’s “success.”

“We’re doing this all more aggressively than ever before,” he said.

Biden has been in office for six months and, however one feels about his performance, the fact that his biggest supporters feel the need to work “overtime” to “aggressively” sell us on his success – even going so far as to tie those questionable successes to a national holiday – should be alarming.

Biden hasn’t even met his own standard of success when it comes to Covid, with the US set to fall short of the president’s goal of having 70% of US adults receive at least one dose of a Covid-19 vaccine by the Fourth of July holiday. Add to this the fact that the Centers for Disease Control and Prevention (CDC) and health advisers such as Dr. Anthony Fauci have been attracting more and more pushback as they ease their Covid-19 rhetoric and seemingly flip-flop on issues such as masking and the origins of the virus because ‘the science changed,’ and you have six months with not a lot to show except for the fact that the big bad Tweeter-in-Chief is gone.

Democrats are not working “overtime” to educate the world on Biden’s successes. They are working “overtime” to rebrand his administration – which includes a retcon apparently erasing Donald Trump from the pandemic – with ice cream and a media blitz using an American holiday to tell us we should be grateful to be ‘allowed’ to exercise the most basic of human freedoms. We are being told the new “honest and compassionate” administration somehow deserves thanks, right along next to those who boldly approved and signed the Declaration of Independence.

The Founding Fathers and Declaration of Independence deserve recognition for acting as the very foundation of this country and of the rights Americans enjoy, while the current administration wants a pat on the back for telling you it’s suddenly okay again to hug your relatives or spend your hard-earned money at a ballgame.