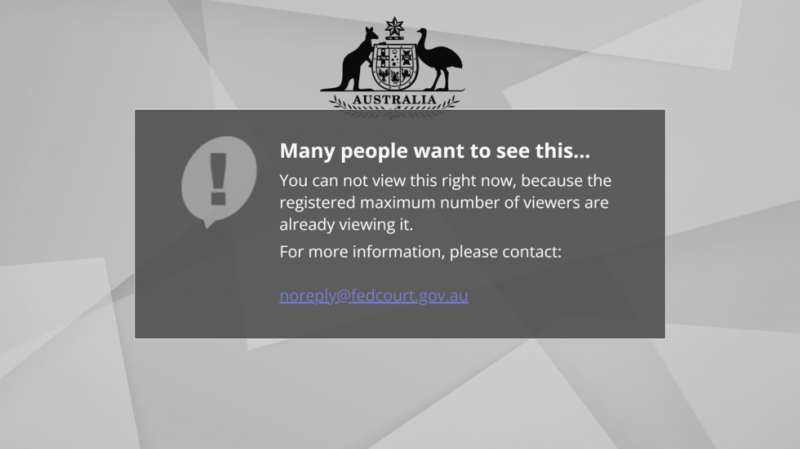 The Australian court hearing for Serbian tennis star Novak Djokovic, who is appealing his visa cancellation, was repeatedly derailed with livestream feed issues, leaving many reporters and the public in the dark.

Before the hearing had even started, issues with getting the official Australian court broadcast to work led to delays. By the time that the hearing had begun, the issues had not been rectified.

Initially, the court reportedly shared a Microsoft Teams link that was quickly hijacked with “silly noises,” techno music, and even pornographic material, according to some accounts. The chaos forced officials to abandon it, resulting in a lawless and unmoderated broadcast followed by many journalists, who were unaware that the stream had even been abandoned.

Sydney Morning Herald reporter Sarah Danckert claimed the court official tasked with moderating the broadcast left “after having trouble” trying to “mute” all the trolls who were spamming it with inappropriate content.

“We’ve had techno blasting, giggling, shouting and someone is just saying Nole repeatedly in a pained voice,” she reported.

Though the broadcast was eventually up and running, continuous tech issues – likely due to the massive international interest in the case, which Australian authorities had seemingly not accounted for – plagued the stream and led to a temporary adjournment. International news outlets had their live coverage repeatedly derailed and readers were left out of the loop as to what was actually happening in court.

Djokovic’s hearing is taking place in the Melbourne Federal Circuit Court on Monday after he had been detained in a ‘quarantine hotel’ for refugees for five days.

The tennis star – who had traveled to Melbourne, Australia last week to compete at the Australian Open – had his visa canceled and was detained on January 5 for failing to provide proof of vaccination against Covid-19. Despite the fact that he had received an exemption to participate in the tournament, as recently recovered, it wasn’t enough for the Australian Border Force who are abiding by country’s strict vaccine-related entry rules.

His lawyers argue that the decision to cancel his visa was unreasonable, while the government lawyers are set to argue for his deportation later Monday.

Djokovic’s treatment sparked anger internationally – including from the Serbian government – and Djokovic’s family said Australia’s treatment of the tennis player was akin to “trampling on the Serbian people.”

Though Australian Home Affairs Minister Karen Andrews claimed Djokovic was “not being held captive in Australia” and was “free to leave at any time,” he could be banned from entering the country in the future if he fails to successfully appeal the visa cancellation in court.