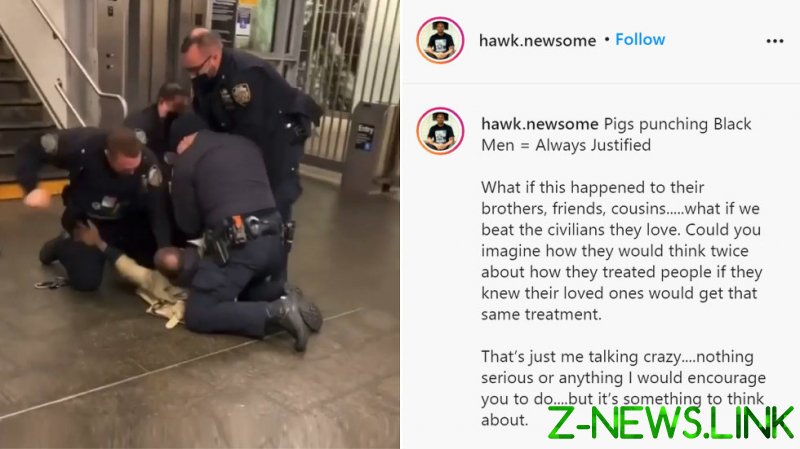 Graphic footage surfaced on Thursday showing three New York Police Department (NYPD) officers restraining a man on the floor of a subway station, while a fourth cop took swings at him, striking him numerous times in the head, face and upper body. The man is seen struggling to break free as the officers eventually turn him on his back and cuff him.

The person filming the video can be heard saying “oh my God” as more police arrived to keep people away from the scuffle. The clip sparked outrage on social media, with many accusing the NYPD of police brutality.

The uproar prompted the police force to respond and release a video of its own which it claims better represents what happened. According to the NYPD, officers were escorting the suspect, identified as Alex Lowery, out of the subway for illegally smoking a cigarette inside the transit hub when he suddenly attacked one of the cops. Lowery and one of the policemen then tumbled down the stairs as the cops attempted to detain him.

“The suspect ends up on top of one of the officers, assaults the officer as the officers fight back. A citizen starts to record as the suspect refuses to be cuffed,” the NYPD wrote in an Instagram post containing security camera footage of the incident. Officers suffered several minor injuries in the attack, the statement read.

The NYPD described the 50-year-old suspect as a “parole absconder” whose criminal record includes “holding a knife to a strangers [sic] throat in an unprovoked attack” in an incident that occured in 2017.

Patrick Lynch, the president of the Police Benevolent Association, a union for NYPD officers, claimed that the officers in the video had acted appropriately after being “spat on, attacked [and] thrown down a flight of stairs.” He added that one of the transit cops “nearly had his ear ripped off” and said the videos circulating on social media were misleading.

“[T]he pro-criminal crowd doesn’t want you to know how truly dangerous the subways have become – even for police officers,” he claimed.

Such violent altercations are apparently becoming more common. New York City has seen a spike in subway crime, including assaults on officers, NYPD Transit Chief Kathleen O’Reilly said on Thursday. The NYPD registered 42 felony assaults in the subway in January, and 15 of the victims were police officers. O’Reilly said the figure represents three times the number of attacks on transit cops in January 2019.

Last week, subway riders in the city were gripped with fear after an assailant went on a stabbing spree, knifing four people, two of whom died, over a 14-hour period. The NYPD deployed more than 500 extra cops to patrol the transit system in hopes of nabbing the man. On Sunday, a 21-year-old homeless man confessed to carrying out the attacks.