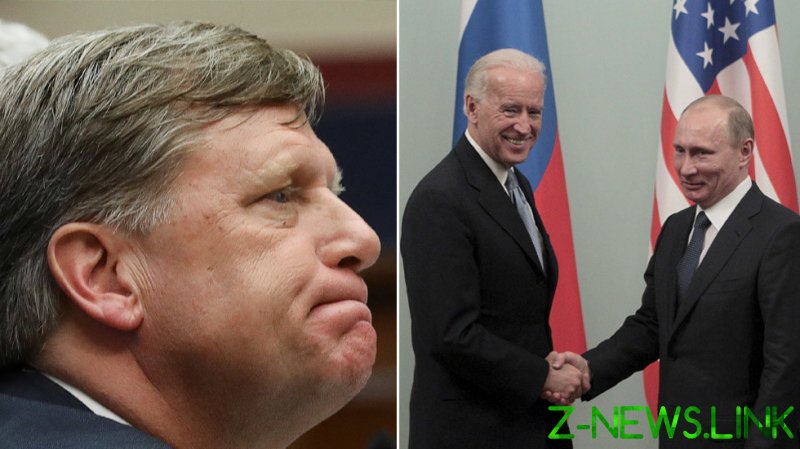 McFaul, who became one of the most outspoken proponents of the debunked theory that Moscow “colluded” with the Trump campaign in 2016, expressed his disappointment on Twitter that Russian President Vladimir Putin has yet to offer his congratulations to the Democratic nominee, who declared himself president-elect on Saturday.

“Has Putin joined the chorus of world leaders in congratulating Biden yet? I haven’t see (sic) the statement. Do post if its (sic) out,” he wrote.

Over the past four years, McFaul has rarely passed up an opportunity to suggest that Moscow is somehow exerting shadowy influence over Washington. Now he is apparently disappointed that the Kremlin hasn’t chosen sides in a contested election. Several states are still counting votes, and recounts and lawsuits brought by the Trump campaign could make declaring a clear victor in the contest premature.

Biden claimed victory after media outlets projected that he would win Pennsylvania, overcoming Donald Trump’s previous considerable lead in the state. The Republican president has refused to concede.

Earlier in the day, Fijian Prime Minister Frank Bainimarama became the first world leader to offer his congratulations to the former vice president, expressing hope that Biden would help the world navigate a “climate emergency.”

By Saturday evening, governments from around the world issued statements recognizing Biden as the president-elect. Canadian Prime Minister Justin Trudeau said he was “looking forward” to working with Biden, while UK leader Boris Johnson said he was eager to begin cooperation with the Democrat’s new administration, a sentiment that was echoed by many European heads-of-state. All members of the Group of 7 (G7) economic organization have issued congratulatory messages to Biden.

Although it’s true that Putin has yet to recognize Biden’s projected win, he’s not alone. Chinese President Xi Jinping has said nothing on the subject, along with Turkey’s Recep Tayyip Erdogan.

In fact, some world leaders have even hinted that they don’t recognize Biden’s victory. Slovenian Prime Minister Janez Jansa on Wednesday declared Trump the victor, and then issued a follow-up statement insisting that the election should not be called until the courts rule on the matter. He wasn’t the only world leader to express unwillingness to recognize a winner in the contest. Mexican President Andres Manuel Lopez Obrador said on Saturday that he wanted to wait for legal challenges to finish before assuming a clear victor.

Similarly, Polish President Andrzej Duda congratulated Biden for running a “successful presidential campaign,” adding that his nation was waiting to see who would be declared the official president-elect by the Electoral College.