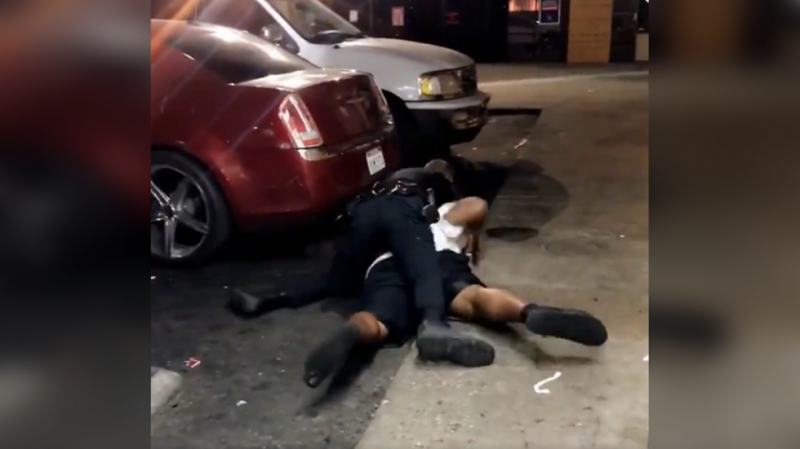 Scores of Black Lives Matter demonstrators amassed in front of the King Tut liquor store in San Bernardino on Friday evening to protest the killing of Mark Matthew Bender, a black man, who was shot and killed there by a responding officer a day before.

Footage shows protesters chanting “F**k the police” and other slogans in support of defunding and disbanding the force.

Police said that the incident unfolded as a lone officer was responding to a report that a man was wreaking havoc in the convenience store’s parking lot. The female caller told 911 that the man was armed, “jumping on top of cars” and “just going crazy.”

Bodycam footage released by law enforcement shows an officer approaching a black man wearing a white T-shirt and black shorts, who police said fit the description of the suspect. The officer calls out to the man, telling him to put his hands in the air so he can see them. Bender shouts: “Why do you have a gun on me?” but appears to comply, briefly raising his hands. Moments later, the man seemingly changes his mind and puts his hands back down, as he continues walking, telling the pursuing officer “Don’t touch me.”

The next moment, the officer jumps on Bender from behind, trying to subdue him while telling him to stay on the ground. In the ensuing showdown, the suspect fights off the police officer, shaking him off with relative ease.

The statement alleges the man “began turning towards the officer and bystanders with the gun still in his hand,” which was when the officer fired his weapon “multiple times” into the suspect, who later succumbed to his injuries at a hospital.

Protesters who took to the streets on Friday, however, argued that the officer should not have resorted to lethal force even if the suspect was indeed armed.

An investigation into the case is now underway.