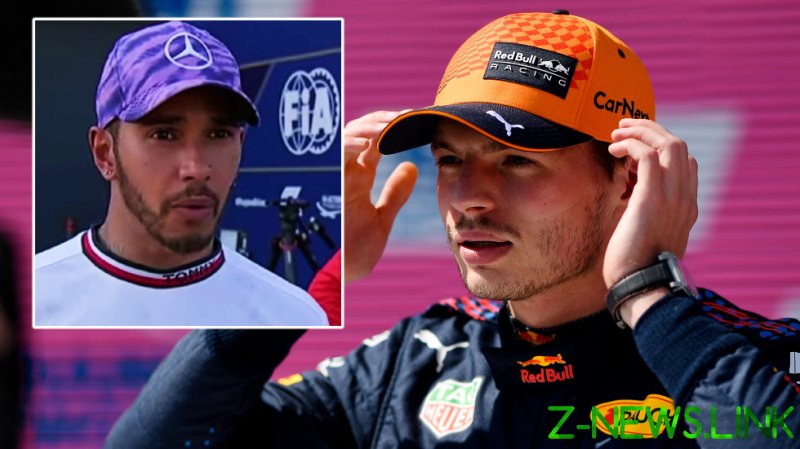 Standings leader Verstappen was clearly disgusted after Hamilton clipped his lead in a race that started with a huge collision between the pair on the first lap, sending the Belgian-Dutchman hurtling into a barrier at such speed that the race had to be red-flagged.

Reigning champion Hamilton was given a ten-second penalty after the shocking incident on a corner, recovering to overtake Charles Leclerc in the closing stages for a much-needed victory at Silverstone.

“Glad I’m OK,” Verstappen told his millions of fans after he was taken to a facility for precautionary checks following an end to his afternoon that saw his concerned team appealing to him to respond to them on his radio in a worrying immediate aftermath of the crash.

“Very disappointed with being taken out like this. The penalty given does not help us and doesn’t do justice to the dangerous move Lewis made on track.

“Watching the celebrations while still in hospital is disrespectful and unsportsmanlike behavior but we move on.”

Christian Horner, the Team Principal of Verstappen’s Red Bull Racing, did not hold back when he was asked about the controversy, calling for further punishment for Hamilton while accusing the Mercedes superstar of acting recklessly and admitting his relief that his driver had not been seriously hurt.

Hamilton mystified many fans by claiming that he had been feeling “a lot of anger” after the “shunt” that had imperiled the man who appears to be his main opponent for the title this year.

The 36-year-old initially appeared to suggest that he had not heard the question when he was challenged about his apparent discontent by Sky Sports.

“I just don’t feel he needs to be as aggressive as he is,” he then suggested. “We were going down to turn six and he was bumping wheels with me, but it’s cool because there’s footage of old, great Formula One drivers bumping wheels on the straight.

“I’m sure it looks cool and everything, but I tried to give him space. I was quite a long way up the inside, going into nine, and none of us backed out.

“That was the end result, but I took the penalty, of course. It’s never one person’s fault – it’s always a balance of the two. I don’t feel anything now; I just chaneled it into my driving, and I’m so proud that I was able to do that in front of the crowd.”

Hamilton claimed that he had not known Verstappen was having treatment, adding that hospitalization was “absolutely not” acceptable.

“Honestly? No,” he replied, when asked whether that news had taken the shine off a dramatic, victorious afternoon. “I would love to race and for us to be able to leave one another space.

“There’s plenty of space on the track for us to get around. When someone’s just too aggressive, these things are about to happen. I hope he’s OK, because I would love to have a wheel-to-wheel race, battle for a whole race.

“I enjoy racing with him and I’m looking forward. I will never back down from anyone and, naturally, I will not be bullied into being less aggressive.

“Today, this weekend, we needed the points. He left a gap and I went for it. We’re not ahead yet, but we’re closer and that’s exciting.”

While many fans on social media boggled over Hamilton’s assessment of the altercation, Mercedes Team Principal Toto Wolff backed his driver.

“It always takes two to tango,” he argued. “Those two were not giving each other an inch and it’s a high-speed corner. It’s nasty to look at but there’s a clear regulation and it’s black-and-white on paper.”

When it was put to Wolff that Hamilton seemed “very aggressive” in the early part of the race and may have been annoyed at losing the sprint race in qualifying, the boss said: “This is a championship where the greatest of all time – the seven-time world champion – is fighting with an… up-and-coming star who is trying to make the point here.

“They collided and crashed. We’ve seen it with these great rivalries before. This is what happened today.

“We can all debate for ages who was at fault. It was heart-racing at times. If neither of them gives in, it results in collisions. He’s fine, as it looks, and the rest of the race was great.”